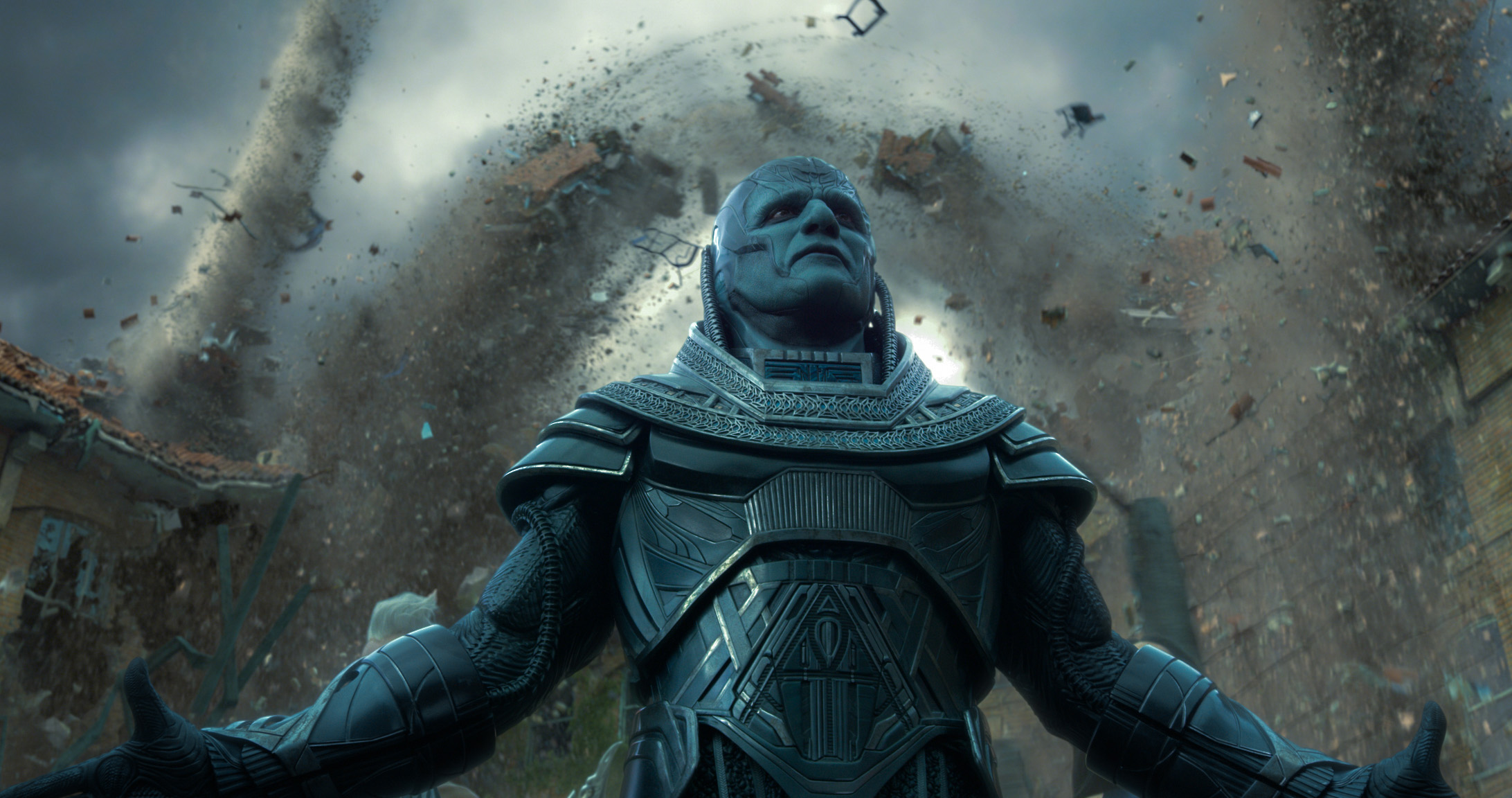 X-Men: Apocalypse does not feel like the third movie in a trilogy, even though it is the third X-Men movie in the latest series. Moreover, it takes the best parts of all the X-Men movies and strengthens them into a powerful film. Putting aside a few minor annoyances (see bottom), X-Men: Apocalypse is a well-crafted film that does not rely on its previous chapters.

What struck me while I was watching X-Men: Apocalypse, more than anything else, was a seemingly obvious message about power. It was almost as if director Bryan Singer were writing a letter to the United States. He’s had a lot of experience with the X-Men, directing all but two of the six X-Men movies. (I’m not counting spin-offs.) All that experience has allowed him to create in X-Men: Apocalypse not only a fantastic tentpole movie for 20th Century Fox, but also a warning about what can happen when you follow false gods.

Too Many Trump Correlations to Ignore

In case you’ve been living on Mars, the United States is in the run-up to the 2016 presidential election. The presumptive Republican candidate is Donald Trump, who has expressed his desire to get rid of immigrants; use our armed forces to intimidate other countries into submission; build a wall between the U.S. and Mexico to keep out unwanted immigrants; and to “make America great again.” Apocalypse, the villain of X-Men: Apocalypse, wants to get rid of everyone but the strongest; intimidate everyone into submission — going so far as to control their minds; build pyramids that pay homage to him and his followers; and make a new, better world. Because he is more powerful than any being on the planet, he attracts loyal followers who are unhappy with their lot in life. He makes them promises about power and destruction that fan the flames of their egos. In turn, they follow him blindly, giving him the tools he needs to destroy everything. Sound familiar?

When Apocalypse speaks to mutants, flattering them and promising them more power, they get a hungry look on their faces that isn’t unlike the look I’ve seen on the faces of Trump followers. They gleefully follow Apocalypse into the destruction of the planet… until they realize that things aren’t turning out the way he had promised.

Watching X-Men: Apocalypse, especially when the titular villain is giving speeches about being all-powerful, it’s hard not to draw comparisons to Trump. Then, when the earth and seas rise up, buildings fall and the sky fills with nuclear bombs, the movie images become visual metaphors (hopefully, only metaphors) of where we’re headed if Trump becomes President.

Comparing Apocalypse to Trump is very specific, when really, the message that absolute power is a terrible thing can apply to any arrogant leader who craves it. It’s a message that can apply to past leaders, like Hitler; Apocalypse takes Erik (Magneto) to Auschwitz, ironically, to goad him into joining forces. Absolute power can be good for no one, because it takes away everyone’s free will, their humanity. X-Men: Apocalypse makes that abundantly clear.

The Greatest of These is Love

Like in previous X-Men movies, one of the strongest messages is that love conquers all. Charles Xavier has always believed that love, and hope, will always beat anger, fear and doubt. Many times, he has pleaded with Erik to turn away from the dark side, and not to give in to his hatred and desire for revenge. He has also begged Mystique to put away her hatred and her desire for revenge in order to do the right thing. In past movies, Charles got mixed results; both of those characters always rest on a knife’s edge and could go either way. In X-Men: Apocalypse, Charles dusts off his “love and hope” speech for Erik, who suffers a horrible tragedy, and signs up for Team Apocalypse. Charles appeals to his heart, his humanity, to try to keep him from completely destroying the world. Even Mystique begs Erik to reconsider what he has to lose by annihilating everyone. (In X-Men: Apocalypse, Mystique has chosen Charles’ side, even though she’s battling humans who mistreat mutants.)

A beautiful flashback sequence helps Erik dig deep, to find the part of him that still has too much to lose if Apocalypse wins. Love and friendship win over revenge and omniscience.

A very clear message in X-Men: Apocalypse is that we need each other to survive. Several times, the X-Men are able to defeat their enemies only by working together. Sometimes they amplify each other’s powers. Sometimes they literally join hands and beat back their foes. However they do it, our heroes are stronger when they work together. The flip side is that Apocalypse is eventually left alone, and is therefore defeated. In fact, each time one of the bad guys finds himself alone, he’s defeated. (That goes for the bad gals too.) Divided we fall, y’all.

One of the reasons Apocalypse’s followers are attracted to him is because he gives them more power. They’re intoxicated with it. They take joy in having more power. Who wouldn’t? And isn’t the best part of being a bad guy ignoring the rules? Meaning, the rules of society, decorum and good morals. Cyclops (Tye Sheridan) and Jean (Sophie Turner) are in the midst of an epic battle to save the planet. Photo Credit: Courtesy Twentieth Century Fox.

Well, turns out the bad guys didn’t need Apocalypse to get drunk on their powers. Alex (Havok), Scott (Cyclops) and Jean Grey are all characters who clamp down on their powers because they’re afraid of them. But, one by one, Charles encourages each of them to just let go. When they do, they’re even more powerful than they (or we) imagined. And they’re able to accomplish more because they let go.

Isn’t that a lesson we hear over and over again? To just let go and everything will be all right? Yes, it is. I don’t know about you, but in my own life, great things have happened when I got out of my own way.

Together, Not the Same

Of course, the central message of the X-men — whether it’s in movies, TV cartoons or comic books — is that it’s okay to be different. When you’re watching these mutants kick ass, it’s easy to forget that they’re the outcasts in their fictional world. The first several movies were about mutants vs. humans. But in X-Men: Apocalypse, it’s mutant vs. mutant. The forced cage battle and Stryker’s underground lab are reminders that our heroes are still considered dangerous freaks of nature. When mutants, including Magneto, save the world, we see military leaders, presidents and commentators applaud them. Professor Xavier’s School for the Gifted is rebuilt. And the world inches closer to accepting mutants, even though they’re different.

Even though I absolutely loved X-Men: Apocalypse, there were a few niggling moments.

Was the use of Wolverine gratuitous? The world loves Hugh Jackman as Wolverine, but does he have to be in every X-Men movie? I can’t decide if his bit in X-Men: Apocalypse was too much or not. Yes, his presence served a purpose in the storyline. But couldn’t the writers have found some other way to get the X-Men out of Stryker’s bunker? It was well-played and well-written, but Wolverine’s scenes kind of stuck out like a sore thumb.

I also didn’t like having characters escape that shouldn’t have. Their escapes felt like set-ups for more X-Men movies, which takes me right out of the story. Having Stryker and Psylocke escape, when everyone around them is doing down, seemed too contrived.

The scene in the woods. Erik makes a point of asking about the men’s missing badges. They reply, “No metal.” So, what was that damn arrowhead made of then, huh? I bet it was metal. That is a tiny, tiny detail, but it really bothered me.

Another part of the story that was too contrived was all the talk about Magneto being Quicksilver’s father… with no pay off. Did Storm really need to ask him about it, in the very last scene? Hadn’t we covered that ground in the scenes with Quicksilver and his mom, then Quicksilver and Mystique (twice)? Then, when he had the damn chance, Quicksilver didn’t tell Erik about being his son. Again, I can only surmise that morsel is being left on the table for a future movie. Annoying!

Finally, the thing that felt emptiest of all, was having no punishment for Erik. Yes, in the end, he helped destroy Apocalypse. But it’s his fault that buildings fell, ships were tossed at sea, and bridges collapsed. I’m guessing those buildings, ships and bridges were full of people, right? Not to mention the dead guys in the forest and at the factory. At least in X-Men: Days of Future Past he was in prison, and rightly so. This time it’s just flannel and smiles for ol’ Erik. Not buying it.

Reviews: See what Amazon customers are saying about X-Men: Apocalypse.

Thanks for reading! Get my free Guide to 75 Binge-Worthy TV Shows.