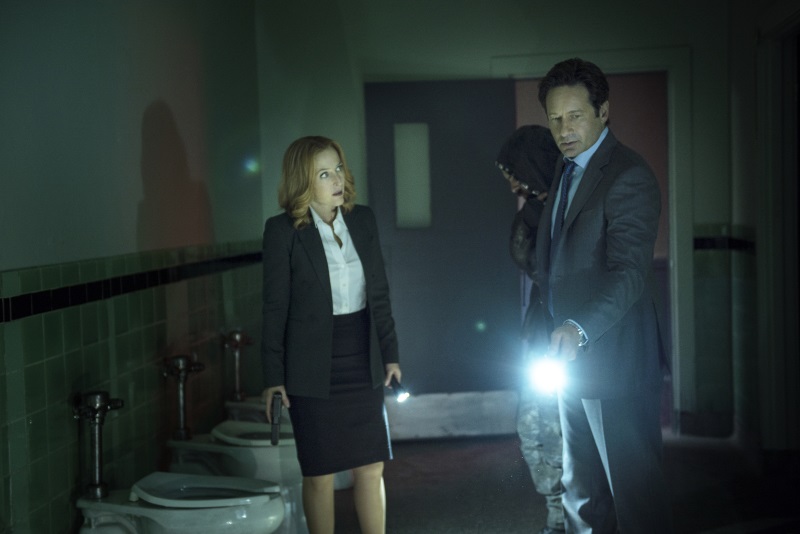 The X-Files Season 10 created a lot of expectations. Because the original series has become legendary, and Mulder and Scully are folk heroes by now. Then Chris Carter’s 10th season (Season X, so to say) arrived in six neat little packages. A bit like a pilot series for a new show. And it wasn’t very good.

There, I said it – for me The X-Files Season 10 was a let-down of epic proportions. And at the end of the sixth episode I was looking a lot like Mulder in the car … tired, beaten, not really interested any more. And no, not even two red-headed female agents could revive my interest.

Where did it all go wrong?

The X-Files – the Decline of a Franchise

Frankly, I am tired of hearing about the genius of Chris Carter … what he did was take Carl Kolchak, gave him a new name, a badge, and a “the millennium is coming, be scared” vibe. Everything else? Just watch the very first episode “The Ripper”, you even have the female colleague, possible love interest, red-headed, ambitious, and offering psychological explanations instead of Kolchak’s woo-woo. But she dies, and I digress. The X-Files were already dead when the show was cancelled. The not-much-lamented “super soldier” addition to the myth-arc (which, in effect, completely destroyed the myth-arc for me) was atrocious. Adding that other Terminator and Annabeth Gish was a bad move, and even throwing Xena the Warrior Princess into the mix did not rescue a franchise that was feasting on its own corpse. Only to end like the other Chris Carter franchise, Millennium, with the beloved main characters simply running away. One suspects from even worse scripts to come.

No, The X-Files were best when they were young, with “monster of the week” episodes, a clear (though deliberately obscured) myth-arc (Samantha, remember her?), fresh actors, and loads of new ideas. Well, new for prime-time entertainment. Who had heard of Unit 731 before Mulder investigated? Some historians, mostly Chinese. The rest of the world slumbered in oblivion. And even the troubles of the protagonists had meaning …

Will She Just Shut Up?

Not so in The X-Files Season 10. It pains me to admit it, but Scully’s constant whining about William became less of a plot device (which it actually never blossomed into), and more of an irritant for me. Yes, I am cold-hearted, get over it. Mulder’s forty-something days in the desert were never explored. Skinner has grown a beard, but that’s it. And the chain-smoking guy is back, with a tracheostomy (which only served the purpose of making him slightly less human). Everybody talked a lot, often without making too much sense, trying to re-cap and re-mould every X-file plus the haunted kitchen sink and the manifestation of a grandmother.

Much too much material.

There were plot-holes as wide as a motorway – like Scully’s race towards Mulder on a clogged motorway, with a big SUV, magically getting through by honking and waving, while smaller cop cars with rotating beacons seem to be stuck? Like the genome and lab technology that was stuck so far in the 1990s that a friend of mine (who really knows such things) almost went apoplectic? With a vaccine brewed up in a single dose in a small NY lab from a minute amount of donated blood saving us from what is already a world-wide pandemic? It was simply too dense. Roswell was again alluded to in a sub-plot, that ended without making any real sense. A super-stealth aircraft is shown, then immediately destroyed. Monica Reyes reappears to light cigarettes and look sultry without adding anything to the plot. The bogeyman of Islamic terrorism is wheeled out to be “current”. (Or was that Carter’s “Sorry!” for the seminal pilot episode of “The Lone Gunmen”?) And we learn nothing. Except that Scully is unhappy.

Some Nuggets of Gold, But …

That is not to say that all of The X-Files Season 10 was bad – the episodes harking back to the “monster of the week” tradition were great, with the were-salesman actually channelling Carl Kolchak, the Band-Aid Nose Man echoing the legend of the Golem and tulpas, all well done and (in the first case) riffing on many themes, with a lot of humour. Mulder’s ‘shroom-induced (or not) wild ride to communicate with a dead (or not) terrorist was poignant. But, that was about it.

The introduction of agents of Miller and Einstein would have worked as a one-off gag.

But having them set up as successors to Mulder and Scully was too much – if that’s what it was. Miller, the believer, and Einstein the red-headed scientist sceptic? Have we had that before? Oh, yes, they used to be called Mulder and Scully. It is never good when you become your own tribute act. And it seems that one option is pursuing just that line of thought.

Options … will The X-Files see a Season 11? Many say so, some hope so, and the massive cliffhanger at the end of the last episode did not help. Will benign aliens intervene? Or was it the Illuminati in a Bilderberger-sponsored super-soldier aircraft? Or is Scully having one of her hysterical episodes with hallucinations? Or are we in a parallel universe, Fringe-style? Or … do we care?

Well, I for one do not really care at this moment in time. The teaser-season has not left me with an insatiable appetite for more. Simply because it did not erase Season 9, and it did not get The X-Files on a firm footing again. It tried to kick-start the rusted machine. And succeeded in having it puttering along for a while. But when the moment came when it should have gone full throttle … fade to black. An anti-climax.

But, there is hope though, because slogging through Season 10 reminded me of how good The X-Files used to be. And I’ll get my old box set out once more.

Two episodes of The X-Files Season 10 were titled My Struggle, a title over which I still puzzle … Loren and Jenny Coleman in their review in Fortean Times (FT 338, p. 41) wrote: “The key to My Struggle is reflective of what is to be found in the Norwegian novelist Karl Ove Knausgård’s 3.600-page autobiographical novel My Struggle …” Is it? Wikipedia at the moment of writing mentions the origin of the title(s) not at all.

Knausgård’s book in the original Norwegian is called Min kamp, and this is a far more obvious reference to another autobiographical piece of writing – Mein Kampf, as written by a certain Adolf Hitler. Which, incidentally, also came in a part 1, and a part 2 … just like The X-Files episodes (Knausgård delivered his book in six volumes).

Was this echoing of Hitler’s work in The X-Files episode titles a random thing? Or another clue? Guess they have me hooked a bit after all …

What does the ‘Batman v Superman’ Dream Sequence Mean?