I have always been drawn to superheroes, especially ones who have super strength of some kind or excellent fighting abilities. I’m sure there’s some kind of psychological label that could be applied to my interest in superheroes, but I don’t care; I just like them.

But something happens, however, when I watch a female superhero go head to head with someone, or something, and take them down. When I see that girl  (or woman, if you prefer) kickin’ butt and taking names, something fires up inside me and I imagine myself as the superhero. Any movie or TV show, or theater production, can be stirring, but watching a superhero show that stars a young, white female who takes charge and saves the world is particularly powerful for me. Why? Because I’m a (relatively) young, white female. 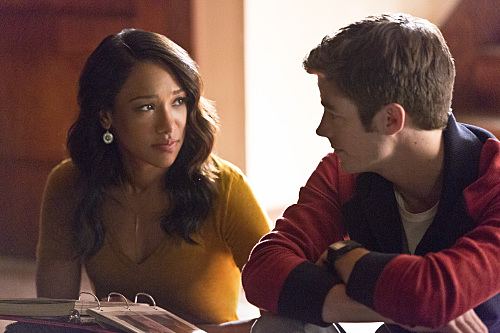 Candace Patton as Iris on ‘The Flash’

I had always known this, without ever really thinking about it. Over the years I’ve been a fan of Wonder Woman, Charlie’s Angels, Buffy the Vampire Slayer, Heroes and Alias. Now I watch Game of Thrones (Mother of Dragons!), Marvel’s Agents of S.H.I.E.L.D., Marvel’s Agent Carter, Once Upon a Time and, most recently, Supergirl, no doubt because those shows are full of women who are heroes. I admire those characters and I can easily identify with them.

Watching the impressive first episode of Supergirl, when she finally comes into her own, wearing the iconic “S” on her chest, I realized something: Identifying with a superhero who looks like me, a fictional one, is empowering. My very next thought was, what about everyone else? Who do they identify with?

I have a very good friend who is a strong, black woman. She and I both love superheroes, fantasy and sci fi. I remember, years ago, how disappointed she was when the first X-Men movie came out. She told me that she had grown up reading the X-Men comics, and that Halle Berry’s performance as Storm, her favorite character, was awful, a real letdown. At the time, I didn’t think much of her comment. I simply agreed that yes, Halle Berry was awful as Storm. (She’s gotten only slightly better in the sequels.) But after Supergirl got my adrenaline pumping, I thought, oh, that’s what Storm means to her, and isn’t it sad that she doesn’t have dozens of black female superheroes to relate to?

There is something incredibly powerful in seeing yourself visually represented, whether it’s a baby doll, a Barbie, an action figure, a movie or TV show. Seeing someone who looks like you do things that you only wish you could do can spur you on, help you get through rough times, or inspire you to be more than you are. So what do people who aren’t white males, or white females, do when nearly no one in the media looks like them?

Right now in the United States, possibly around the world, racial tension is high. I don’t pretend to be an expert on race relations, racism or anything about it. I’m struggling to understand racism, privilege and all its implications. But having this “aha!” moment, even though it was while watching Supergirl, gave me the tiniest glimpse into someone else’s world.

I’m no comic book expert, but even I know there just aren’t a lot of superheroes who aren’t white. No wonder so many fans were excited that Black Panther finally got his own movie. Everyone was excited for that flick after catching a glimpse of him in Captain America: Civil War. There’s been the tiniest increase in diversity lately. James Olson on Supergirl is played by Mehcad Brooks; Candace Patton plays Iris West on The Flash; David Ramsey plays John Diggle, Oliver Queen’s best friend on Arrow. (It’s no coincidence that Greg Berlanti is the executive producer on all of those shows.) Marvel’s Agents of S.H.I.E.L.D. stars Ming-Na Wen and Henry Simmons. But that handful of roles is a small fraction of butt-kicking guys and gals on TV.

In an increasingly diverse population, it is past time to see more diversity on TV — and comic books and movies and, well, you get the idea. Like I said, I’m no expert and I can’t begin to understand what it’s like to be a person of color. I do understand what it’s like to be female, and continually underestimated, patronized, passed over and dismissed. So if Supergirl can make me feel better about my place in the world, what would a strong superhero of color do for someone else?

Thanks for reading! Be sure to get my free guide to DC movies.