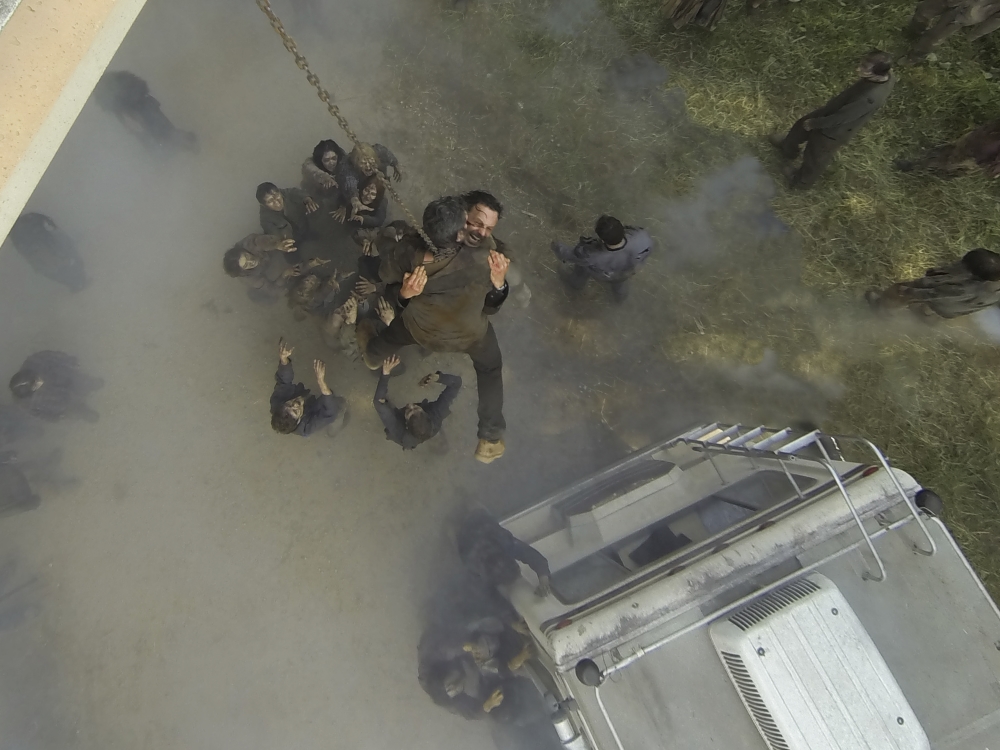 ‘The Walking Dead:’ How Far Can We Go?

A lot has already been written about how grim and disgusting the Season 7 opener of The Walking Dead was. There are plenty of things that I find disgusting and the older I get, the longer the list gets. But this episode did not really bother me in the same way that it has bothered most. Spoilers follow…

We Now Return to Your Regularly Scheduled Armageddon

Certainly, seeing Abraham (Michael Cudlitz) and Glenn (Steven Yeun) get their heads bashed in was gross, but it was not the gut punch that others have described. I believe that is partly because these are not “real” characters to me. I’ve written in other reviews about my hopes and disappointments with this show. In short, The Walking Dead has fallen far short of creating characters with depth that resonate with me.

So in moments like this, I tend to be detached from the on-screen action, thinking about actors’ choices and what was said in the writers’ room. On this show I often wonder if the writers see it all as over-the-top, giving a wink and smirk at the camera. But then I think the actors get these ridiculous and extreme situations and try to play it straight, taking it all too seriously.

As a result, I was watching Glenn and feeling more sorry for Yeun who was trying to play the scene straight, wearing the most ridiculous horror makeup, and trying to connect with his fellow actors.

A lot of this boils down to a tone that is part comic book/horror film sensibility–with tons of gross-out and nuh-uh moments–and part melodrama from the silent film era.

Nobody throws their head back and brings their wrist to their forehead to communicate despair, but it gets close sometimes.

What is disturbing to me is a continuation of a project that began in horror films but is now mainstream entertainment. That project is: how far can we go? I get the feeling that some TV producers are sitting in a conference room wondering how they can one-up The Walking Dead. Now that they’ve beaten two main characters to death with a baseball bat in terrible, gory detail, what’s next? There’s no crying in baseball!

I remember in the 1980s, there were two movies that used the crushed skull for effect. In Platoon, inexperienced Taylor (Charlie Sheen) watches Bunny (Kevin Dillon) pummel a disabled villager with his rifle butt. After a blow to the man’s cheek, the camera cuts away, and Bunny says, “Did you see that fucking head come apart?”

I think me and everybody else was horrified and rightly so.

This was a movie based on real experiences, and director Oliver Stone wanted to bring an authentic experience to the screen. Even at that age, I had seen a lot of disturbing stuff, but I still cringed and was revolted by the violence and the sadism.

The other movie was The Untouchables. Even before I saw the movie, I heard about the infamous scene of Al Capone (Robert DeNiro) killing a man with a baseball bat. This was also one of the most violent scenes of the decade in a mainstream movie. Again, it was based on real events, but Capone was cartoonish and exaggerated. Still, after the last bat swing, viewers are left with an overhead shot of man laying on the table, a pool of blood quickly spreading.

Both of those scenes seem quaint now.

Needless to say, The Walking Dead went much, much further with crushed heads, gross sounds, and plenty of gore. Somewhere on a schoolyard, a 14-year-old is telling his friends, “Oh man! It was so nasty! You should have seen it!” His friends now must test their mettle by watching the scene as soon as they can watch it surreptitiously behind their parents’ backs.

That doesn’t bother me as much as a producer saying the same thing to his showrunner. They are wondering how their next gross-out scene can “go viral.”

What is more troubling is how many people are anxious to plumb the depths with them. How far can we all go? Please, suh, may I have some more?

I have really enjoyed a lot of AMC’s original programming like Mad Men and Breaking Bad, two shows that have a place in TV history. But every so often I remember that American Movie Classics was known for showing Fred Astaire-Ginger Rogers movies and appealing to senior citizens.

Now it regularly shows scenes of extreme graphic violence that are far more explicit and horrific than the most violent scenes I can recall from 1980s R-rated movies. And I sit on the couch watching, nonplussed. It does give me pause.

‘Westworld’ Opening and its Symbolism