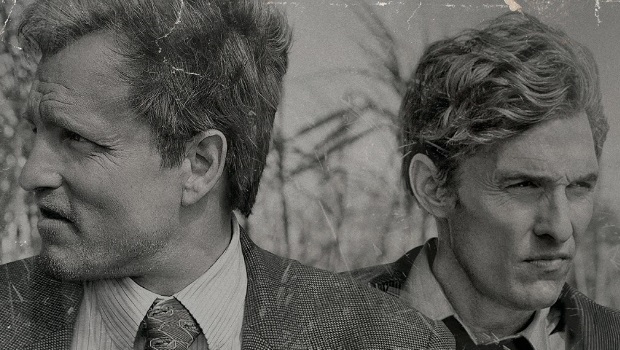 True Detective is a hard-boiled detective show on HBO. Set in 1995 and 2012, the show keeps things interesting with constantly switching perspectives, although 1995 Louisiana seems a lot like the ’70s. The show stars Matthew McConaughey as Rust Cohle and Woody Harrelson as Martin Hart, both Louisiana state police detectives. Both actors fully inhabit their characters and make the show much more interesting than it would have otherwise been if, say, they had cast two great actors with less personality, say Dylan McDermott and Brad Pitt, even though the directing and writing on the show are top-shelf. The atmospheric show has a lot of realism that makes the crime seem more real because it is so strange. The horrific crime is a killer of women who sets the bodies into strange antler tableaus and Rust and Hart are on the killer’s trail. Now, there’s a lot I like about a detective show, but my favorite part is always the whodunnit aspect. Good mysteries are a rarity and so far, this one seems excellent. You can’t really know if it works until the culprit’s reveal, of course. We know that the detectives made an arrest in 1995 and there was a gun fight. In the 2012 scenes, both detectives are being interviewed by two more detectives who have caught some similar crimes. I think we are supposed to believe that Rust and Hart are both suspects and they probably both know it. Rust has fallen on hard times, a drunk who scrapes by on menial jobs, but still very smart. Hart has climbed the ladder and is in management now. Both have a lot to say about each other. But the whole show is gearing up to who killed these girls and we all know it isn’t whomever they went after in 1995.

For those of you who are interested in point of view, this show employs flashbacks rather than re-creations of what is being explained in the 2012 interview scenes. In other words, not everything that is seen in the 1995 scenes would be something that you would explain to an investigator. Hart and Rust are both in very different places in 2012 than they were in 1995, but both of their cop instincts are still razor sharp and they are constructing narratives rather than spilling their guts. Although I think this is an instance where we can believe what we see.

I said earlier that 1995 seems like the ’70s, but other than the cars and the clothes, the show could be as early as the ’20s: no one is looking at computers, it’s all paper files, no one is talking on cell phones, there have been at least two pay phone moments– although there are some pagers, now that I think about it. This is not a tourist board approved Louisiana; everything is ugly, beaten down, and, often, burned. When they go to a open-air camper brothel, nothing about it is appealing, particularly the women. Drugs permeate every moment, with so many of the dregs of society being high and scared of cops, and the cops drinking hard and taking weird drugs. This might be the first time I’ve seen someone take a Quaalude in a long time! And if you like old-time religion, this show has at least three different flavors.

True Detective is very cerebral. We have the two detectives, one down-to-Earth, Hart, and one so up in his own head that it’s unhealthy, Rust. Rust struggles with what he knows is going on and police procedure. When he finds a name that keeps showing up, logically, he knows that the guy must be involved. But he already has an image in his mind of what this killer would be like. Cole has said at least four times that you have to follow the evidence and that having any preconceived notion of the killer or his motives will hurt the investigation since you are trying to piece together a puzzle in your head instead of interpreting the evidence that you actually have. It sounds simple, but when you apply it to real-world incidents, like the George Zimmerman case, it does show how both of those perspectives happen all the time. Every time I read about Zimmerman, I kept thinking of an answer that showed up in standardized tests when I was a kid, “Need More Information.” Even now that he was brought up on domestic abuse charges, it makes him seem so guilty. But one thing does not necessarily have anything to do with the other. I think that’s why I like my TV mysteries to definitively catch the killer, because it so rarely seems to happen in real life. I imagine that the True Detective‘s perspective is that there is a middle ground that they have to find. Again, sounds simple, but it’s the fictional application of this idea that is interesting. I’m not making it sound like it, but the show is very funny. There’s a lot of Southern manners on display, with Hart’s wife constantly trying to make Rust into a normal person, having him to dinner, trying to fix him up with a lady, and talking to him. There was a great moment when Rust borrowed Hart’s lawn mower and then mowed Hart’s lawn when he returned the mower. Hart flips his lid when he comes home to find someone else drinking his wife’s sweet tea.

Speaking of Hart’s wife, let us take a moment to praise Michelle Monaghan, who plays Maggie Hart. She might be the only likable person on the show, the only person you might want to sit down with and play some euchre. She’s one of those actresses who has quietly built up an impressive body of work, slipping between indie darling and blockbuster eye candy. Her conflict with her husband seems reasonable and she handles confrontation really well. I’m always pleased when she’s in a scene because I know it won’t be as bleak.

My first real criticism is idiotic, but the name of the show is too generic to keep in my head. I don’t know how many times I have inadvertently seemed to be verbally reviewing Clint Eastwood’s True Crime. Sorry, Clint! I’m a big fan.

There are actually lots of problems with the show. For instance, Matthew McConaughey’s character, Rust Cohle, spouts college philosophy dreck all the time and it gets kind of annoying. But the perspective of the show doesn’t seem to be saying that Rust is correct, rather that he is wrong. I doubt his babbling is converting anyone. Another problem is that the show rambles a bit. We watch Woody and Matthew talk a lot, but some of it seems like repetition. But they’re both so good that I don’t mind too much. Also, this show seems almost like Mad Men in its sexism, but, Jesus, was it really so bad in 1995?

To elaborate on my point about Rust’s philosophy, Rust is trying to be robotic in his reasoning, but obviously feels things quite a bit. The loss of his wife and daughter (who he may have run over) hit him very hard and triggered his alcoholism. We are invited to contrast this with the seeming family man, Woody Harrelson’s Martin Hart, a drinker who is cheating on his wife and even in the flash forwards to the present, still rationalizing that whatever helps him with the job– drinking, cheating– is okay. Neither of these men are what they appear to be. But Rust is trying hard where Hart seems to be just following his impulses. Part of him wants a wife and a family, part of him wants the fun of a girlfriend, part of him wants to be a good lawman, part of him wants to get ahead at work.

A weird pet peeve of mine is when a TV show lies. In the first episode, we learn that people call Rust “The Taxman” because he carries around a large ledger instead of a little notebook. We’re four episodes in and NOBODY has called him “The Taxman.”

This isn’t a spoiler, because I have no special insight, but there are three people I think could be the killer right now. The first question we have to ask ourselves is why two movie stars get involved with a TV show? The answer seems obvious to me

;because there is a twist that takes this above what you would expect from a TV show. I know that neither Matthew nor Woody are going to be involved next year, so it seems obvious that one of them is the killer. The more I watch, the more screwed up Hart seems, so I think it’s him. Also, and I can’t defend this, Hart seems to be the one who can have a double life and he seems to go through moments that really calm him that we don’t see. We have been led to believe that it is because of the company of his massively hot mistress, Lisa, played by Alexandra Daddario. The other two people that jumped out at me were under the auspices of great actors in small parts, which usually denotes something coming up. The first was The Wire’s Lester, Clarke Peters, who was a minister at a small church. He’s a possibility. And if this was CSI, the killer would definitely be Billy Lee Tuttle, played by Jay O. Sanders, who is a religious leader, who, I think, they said was related to the governor. But I think he’s going to be a red herring.

Anyway, I think it’s Woody’s Martin Hart who did the killing. He is extremely jealous and violent. When his mistress picks up a man in a bar, Woody breaks into her apartment to harangue him and is only concerned if Lisa performed oral sex on him. It jumps out as something a crazy person would do. Also, in the moment where Rust mows his lawn, Hart seems most put out by the image of his home life being disrupted by another man, as if the actual life isn’t real to him except in the motions that make it seem like a real life.

I’m probably wrong. But it’s fun to get some guesses out there.

It’s weird that both True Detective and the last season of Hannibal feature murdered women with antler involvement. Is this a real thing that happened?