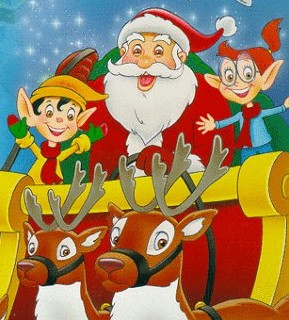 ‘The Story of Santa Claus’ Review

Ed Asner (Up) is heard as the toymaker, Nicholas “Santa” Claus, and Betty White (Hot in Cleveland) as his wife, Gretchen. They are in dire financial straights with nowhere to go when their heartless landlord evicts them from their small shop. With only a bag of toys to their name, they decide to deliver the toys to the children of the Angel’s Island Orphanage, the place where Nicholas grew up.

On their way to the island, Santa and Gretchen are enveloped in a terrible storm and dragged out to sea, finally washing ashore at the North Pole. Tim Curry (The Wild Thornberrys) is heard as Nostros, the leader of a band of tiny elves, whom they meet at the Pole. Nostros orders them to leave and is about to attack them when his son has an accident and Santa gets the chance to save the boy’s life. Under these unforeseen circumstances, Nostros is forced by elfin rules to grant Santa his fondest wish — which is to give every child in the world a toy on Christmas.

If the elves fail to grant Santa’s wish, all elves around the world will lose their magic — forever. Under intense pressure, the elves draw on all their magic as they work feverishly to make the presents in time for Christmas. But, when Christmas Eve finally arrives, there is no guarantee that Santa will be able to deliver all the toys. With Nostros along to conjure up all the magic available, Santa takes off on the great holiday adventure with a sleigh full of presents and a heart full of Christmas spirit.

Marie Maxwell and John Thomas composed the score, which includes four original songs: “To Give Every Child in the World a Toy,” “We’re Gonna Pull It Off,” “Clement’s Song” and “Santa’s Ride.”