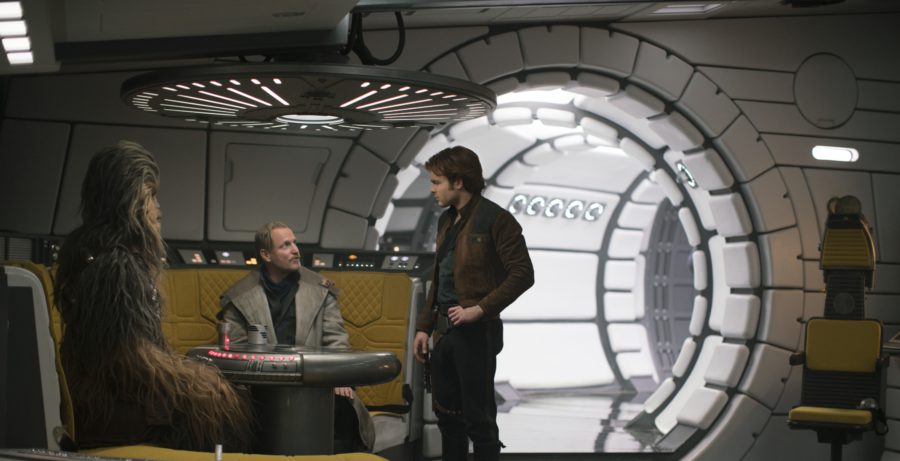 A few thoughts on Solo: A Star Wars Story: Surprises, Hanging Plot Lines, and Why I Love Han Solo

I loved the Solo: A Star Wars Story, but it wasn’t well directed. I felt like the script was a work of art, hitting a lot of great classic Star Wars notes, silly, serious, touching, silly.

Disclosure: Some of the links in this blog post are affiliate links, which means Media Medusa gets a commission if you make a purchase using these links.

The directing was confusing, with large set pieces where it wasn’t clear who was where and doing what. Solid filmmaking, but a great director would have made this movie something truly special. Altogether, a worthy entry into the Star Wars canon. I think even the biggest hater could be convinced that this movie is better than Star Wars: Attack of the Clones.

But the acting was top-shelf and a lot of fun.

Special shout out to Emilia Clarke who really made the most of her part, showing moments of real joy and pain. Alden Ehrenreich as Han was great, goofy, younger, but a good run at Han, particularly with the handicap of not being a young Harrison Ford. Emilia Clarke is Qi’ra and Alden Ehrenreich is Han Solo in SOLO: A STAR WARS STORY.

The biggest dumb issue with some of these prequel-type movies is that they can never really figure out what origin is important to reveal and what is just, like, a gun that Han happens to own. Solo: A Star Wars Story really super concerns itself with the story of Han’s dice from the Falcon which I’m guessing most people hadn’t even heard of until Star Wars: The Last Jedi. Sure, I knew he had the dice. But I just figured it was a joke about how a lot of people hung fuzzy dice from their rear-view mirrors in the 1970s and that’s as much thought as I ever gave them. So the dice were a huge part of this movie and they never got explained other than to say that they were important to Han. Not every item someone owns is a totem! “Oh my God, he’s at the shoe store? Is he going to buy the boots? Where in the hell did he get that vest?” No one asks these questions, Disney!

Having Lawrence Kasdan, and to a lesser extent, his son, write the movie was pure genius. Kasdan co-wrote Star Wars: The Empire Strikes Back and Star Wars: Return of the Jedi. Kasdan gets Han Solo’s character without having to be too reverent to Star Wars itself. There were a lot of moments right out of Empire with Han really just trying to “improvise” his way out of trouble.

And man, did they get that you can’t rely on Lando! Oh, sure, the Rebel Alliance forgave Lando for selling out Han, Chewie and Leia, but I never will. Although it’s nowhere near the best of the best Star Wars movie, I really think Solo: A Star Wars Story might have been the best written of all the movies, just a space adventure with lots of twists and turns.

With Solo — unlike Rogue One, where just about everyone dies (Did anyone else tear up when they found out that the last surviving Corvette in The Last Jedi was called the Raddus? Anyone else think Raddus would have approved when Hold rammed it down the First Order’s throat?)— Disney was doing some very conspicuous world-building. As I mentioned, Emilia Clarke did a great job, but didn’t it seem like Qi’Ra’s story was just beginning? She simply did not feel like a character that we would never see again, particularly when it was revealed that her boss was Darth Maul. And how about Enfys Nest starting the rebellion? It felt like that character was going to be revisited.

A disclaimer: I’m not a guy who takes the Star Wars cartoons seriously. Oh, sure, they’re good. And I know that Darth Maul shows up in the cartoons with spider legs. But I take the movies as canon and everything else as “this might be true,” particularly the novels. Some of the cartoons are great. They’re just not canon, no matter what anyone says. Alden Ehrenreich is Han Solo and Joonas Suotamo is Chewbacca in SOLO: A STAR WARS STORY.

So in Star Wars: The Phantom Menace, Obi-Wan cuts Darth Maul in half and he falls down a deep pit and dies. As a matter of fact, Lucas famously had Darth Maul digitally cut in two so that everyone would understand that Darth Maul had ceased to be, had gone to meet his maker, was bereft of life, and had joined the choir invisible. And in Solo, Maul turned out to be alive with what looked suspiciously like General Grievous’s legs, running Crimson Dawn, a criminal organization that cuts out people’s tongues. So what does that mean? It means that someone has to hunt that son of a bitch down and kill him. He killed Qui-Gon Jinn! He cut out those people’s tongues (or had it done or whatever).

Obviously, a big thing with Sith is that they are good at hiding. A secret Sith Lord, Palpatine would routinely talk to members of the Jedi Council without anyone catching on that he probably knew just as much about the Force as any of them. So I can totally believe that if Maul managed to survive like the rat he is that he could conceal himself from his former master, Palpatine. I guess he could even hide himself if he was running some giant criminal syndicate that cuts out people’s tongues (the tongue thing really bothered me, I guess).

Probably that the first thing most people would think of is that Palpatine would want Darth Maul dead, the Sith Rule of Two and all that. And that there might be a super cool Darth showdown, between Maul and Vader. But that feels a little on the nose and we’ve already had a lot of movies with Palpatine and Vader being effective jerks. And I don’t think we’re ever going to get a Star Wars movie from the perspective of a bad guy. But who knows? People love that Boba Fett. Alden Ehrenreich is Han Solo and Joonas Suotamo is Chewbacca in SOLO: A STAR WARS STORY.

So,we do know that two Star Wars things are happening in the future.

One is that there is probably going to be an Obi-Wan Kenobi Star Wars story with Ewan McGregor reviving his splendid Obi-Wan. For my money, that’s the movie to kill Darth Maul in. I would believe that learning about Darth Maul being alive would have old Ben temporarily abandon standing sentinel over Luke to go into the world and cut Darth Maul into four pieces this time. Fan boy wishes? Probably. And literally nothing is known about that movie, which might not ever happen. But I think it will and would love to see an older Obi-Wan take Darth Maul to youngling school.

The much more likely scenario is that we’re going to get a series of movies about Crimson Dawn and Enfyss Nest from Game of Thrones TV creators David Benioff and D.B. Weiss, who are being let loose on the Star Wars universe. I suspect that they and might just take one of their finest actors with them, Emilia, for their story. (Although to be fair, I don’t think there’s a bad actor on Game of Thrones.) Anyway, my guess is that Qi’Ra’s story has just begun. Although I also suspect that her and Han’s love story is over. He’ll have to find something else to live for.

I guess that Maul, Crimson Dawn, and Enfyss Nest could be in the fabled Star Wars TV show that never quite materializes, but Darth Maul seems like he is too big of a character to put on TV. With moves like that, the guy needs a big budget!

Anyway, for me, the coolest guy ever in the galaxy is Han Solo from Star Wars: A New Hope and Star Wars: The Empire Strikes Back.

When Han shoots Greedo and then flips the bartender the coin for the mess? Seven-year-old me just couldn’t believe that anyone was that awesome. The second coolest guy in the universe is nice guy Han from Star Wars: Return of the Jedi and Star Wars: The Force Awakens. But a lot of cool guys start out as lovable goofballs, and the Han from Solo: A Star Wars Story can at least stand alongside that other guy and not be embarrassed, which is a clear win for Solo: A Star Wars Story. I actually loved it when Qi’Ra told him that he was the good guy, as much as I didn’t like it in Star Wars when Luke says, “I knew that there was more to you than money!” Qi’Ra was telling Han something about himself that he actually hadn’t figured out yet. And yet Han still shoots first at Beckett, killing him, because sometimes the good guy isn’t an idiot.

Anyway, all I can think about now is seeing Solo: A Star Wars Story again. You know who is awesome? Han Solo.

By the by, I wasn’t completely wrong about Dr. Evazon being in all the Star Wars story movies. I spotted one of Evazon’s Decraniated— who are horrific— on Dryden Vos’s yacht! Dr. Evazon had been there!

(Not completely wrong is just another way of saying, I was wrong. I was totally wrong.)

Do you think Solo: A Star Wars Story was better than the critics say? Tell me in the comments!