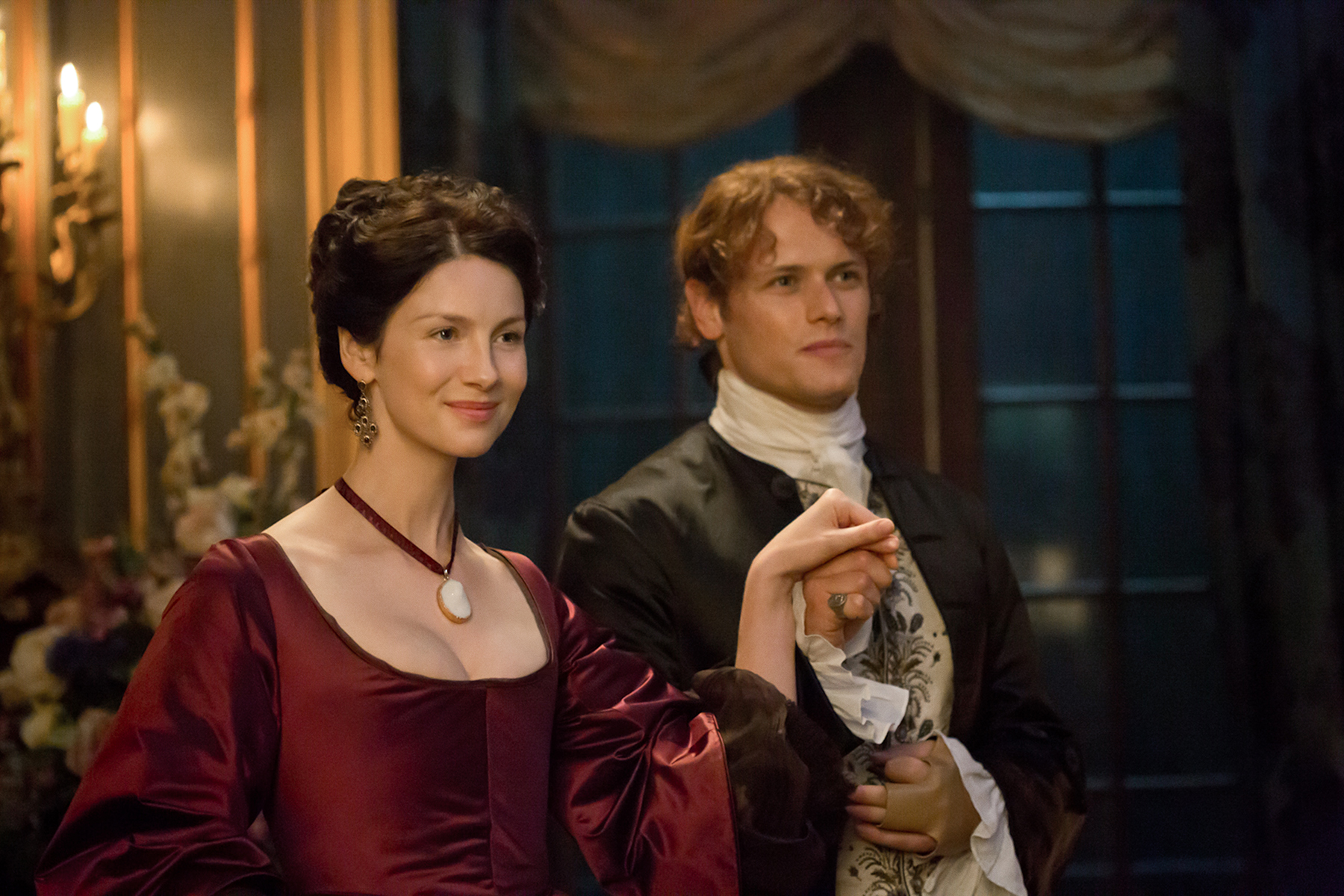 Like millions of other fans, I have my own Outlander Season 2 wish list of scenes that I remember fondly from the books. In the run-up to the second season, we’re being swamped with pictures of sumptuous gowns, velvety waistcoats, manicured gardens, and gilded decor. Fans who didn’t read the books may be wondering how Claire and Jamie can leap from the rustic Scottish countryside to fashionable Paris.

If you’ll recall, at the end of Season 1, Claire and Jamie were sailing from Scotland to France, escaping Jamie’s “criminal” past, and looking to the future, which includes a newborn babe. Claire is pregnant, even when she thought she was barren. But how do these two, seemingly penniless spouses, wind up living like royalty in Paris?

Jamie has a cousin, Jared Fraser, who is a very successful wine merchant. He invites Claire and Jamie to live with him, and gives Jamie a high-level job in his business. Jamie’s business position puts him at some of the trendiest tables in Paris. He and Claire’s mission, to stop the impending second Rising of the Scots against the English, also forces them to mingle with the wealthy and titled. Hence, the gorgeous ads showing Claire and Jamie in rich finery.

I’ve spoken to lots of fans of the books who had a very difficult time slogging through Dragonfly in Amber, the second book in the Outlander series. I confess, jumping back and forth between two timelines (18th Century France and 1960s Scotland) was jarring. Add to that the disorientation of living with Claire and Jamie in an unfamiliar environment, and Dragonfly in Amber can be confusing.

However, the payoff at the end of the book is worth pushing through every tedious dinner party. And several of the most beloved Outlander characters from future installments are introduced in Dragonfly in Amber. Let’s run down an Outlander Season 2 wish list of scenes I’d like to see, in no particular order.

Let’s check in to see if my favorite scenes from the books made it into Outlander Season 2.

BIG ONES. I MEAN IT.

My favorite scene in Dragonfly in Amber takes place in Claire and Jamie’s bedroom. No, it’s not that. Jamie spent the night carousing with Bonnie Prince Charlie, which included spending most of the night at a brothel. Just as Claire is forgiving Jamie for partying with whores, he strips down to get in the bath and she sees bite marks on his thighs. After he climbs into the bath, thinking he has smoothed things over with his wife, Claire dumps a bucket of cold water on his head.

It’s my favorite scene because it’s one of the first time the two of them are not on the same page. It’s also such a commonplace argument between a wife and a husband — jealousy, the husband partying while the pregnant wife is at home — that I find it endearing. Instead of fighting off Redcoats, they’re wrestling with what it’s like to be married.

Update: Yes! The scene was much shortened, and Claire didn’t expect Jamie too closely, but the bath scene was there! Poor Jamie. Er, right?

If you’ve read the books, you know Claire suffers a miscarriage after watching Jamie duel with Black Jack Randall. She winds up at the very hospital where she has been volunteering. She’s in a bad way, until Master Raymond, a mysterious apothecary who she has befriended, comes to her aid. In a fevered state, her memories are fuzzy, but one of her memories is of a blue light coming from Master Raymond’s hands, and then her womb, as he heals her. This scene is on my Outlander Season 2 wish list for two reasons. First, Claire is saved. She begins to heal. Second, it reveals that Master Raymond is more than just an apothecary, and he has secrets.

Update: Yes! In fact, the “Faith” episode is incredibly powerful, thanks in part to the writing, but mostly because of Caitriona Balfe’s wonderful performance. She managed not to be too melodramatic, but still conveyed the absolute horror of miscarriage. Plus, it was filmed so Master Raymond didn’t appear to be super creepy.

No Garden of Eden

Jamie is put into prison for duelling with Jack Randall. Claire sacrifices a great deal to get him out. One of the most amazing scenes in the book is when they make-up in the garden at the house where she has been staying. Jamie finds her, and the two talk. It is not, however, an easy conversation. They do not throw themselves at each other and immediately forgive all. They discuss the miscarriage, the duel, the Rising. I like this scene because it wasn’t easy. So many times in a marriage you must come together after a rift, whether you want to or not. Even if all you take is the first step toward reconciliation, it is better than none. You don’t have to completely forgive the other, but you must at least begin to.

Update: They had this difficult conversation, but again, like most TV shows adapted from books, the scene wasn’t nearly as long and tortuous as it was in the books.

Claire finds herself entangled in the King’s court, in order to help Jamie get out of prison for dueling. One of her nastiest adversaries, Comte St. Germain, manipulates the King and others into bringing Claire to a scary, late-night reckoning, accusing her of being the White Witch. She is pitted against the Comte in a do or die situation… and comes out triumphant. I like this scene for the same reason probably everyone does: The Comte dies and Claire escapes. I can’t stand that damn Comte! He’s evil! Also, after this scene, men are much more fearful of her. She becomes more powerful because of it.

Update: Oh, yes! This was one scene that actually played better on TV than in the book!

He is introduced just before the Battle of Prestonpans. He sees and hears Claire at the center of the Scots encampment, and mistakenly thinks she has been kidnapped. At only 16 years-old, he attempts to rescue her. Jamie, however, not only captures him, but deceives him. Jamie lets him think Claire really is a captive, going so far as to strip her to the waist in front of all the men.

This scene is on my Outlander Season 2 wish list because there is so much at stake and about three different storylines are playing out. 1) Jamie and Claire are heading into what they know will be an important battle. And they are still trying to carry out their mission to avoid the Battle of Culloden. 2) Jamie and Claire are still working out their differences. Jamie’s show of being her captor puts them at odds even more. Not to mention the fact that the men can’t look at her quite the same after. The whole scenario provides a lot of humor. 3) Lord John Grey is struggling with a couple of things. Not only does he feel defeated because he’s been captured, he finds himself attracted to Jamie. On top of that, he’s humiliated when he discovers Claire is Jamie’s wife.

Update: Hm, yes, the scene was included, but it wasn’t nearly as impressive as the one in the book. Lord John Grey’s part was almost brief and not nearly as foreboding as it should have been.

Breaking Up is Hard to Do

Well, not so much breaking up, as saying good-bye to the love of your life, knowing you’ll never see him or her again, and that one of you is headed toward certain death.

At the end of Dragonfly in Amber — the painful, gut-wrenching, heart-breaking end — Jamie sends Claire back through the stones, back to the future. They decide Claire and their unborn child will have not only a better chance at survival in the future, but also a better quality of life. The Redcoats are bearing down on them. They both know how the Battle of Culloden will end. So Claire leaves.

Before she leaves, however, we are treated to one of the most passionate scenes in the all the books. The two of them — how should I put this? —  get about as carnal as a man and woman can, up against a stone wall, while soldiers are storming up the hill. On top of that, they use a dagger to mark each other with letter-shaped scars, to show that they will forever be owned by each other.

If that ain’t love, I don’t know what is.

What’s your favorite scene from Dragonfly in Amber? Let me know in the comments below.

Update: Oh, yes. Of course, the scene was included. But thanks to the ridiculous back and forth flashbacks, the entire Culloden sequence was robbed of the gravitas and powerfully tragic nature it should have had. This scene was much, much better in the book, for its exquisite pain.