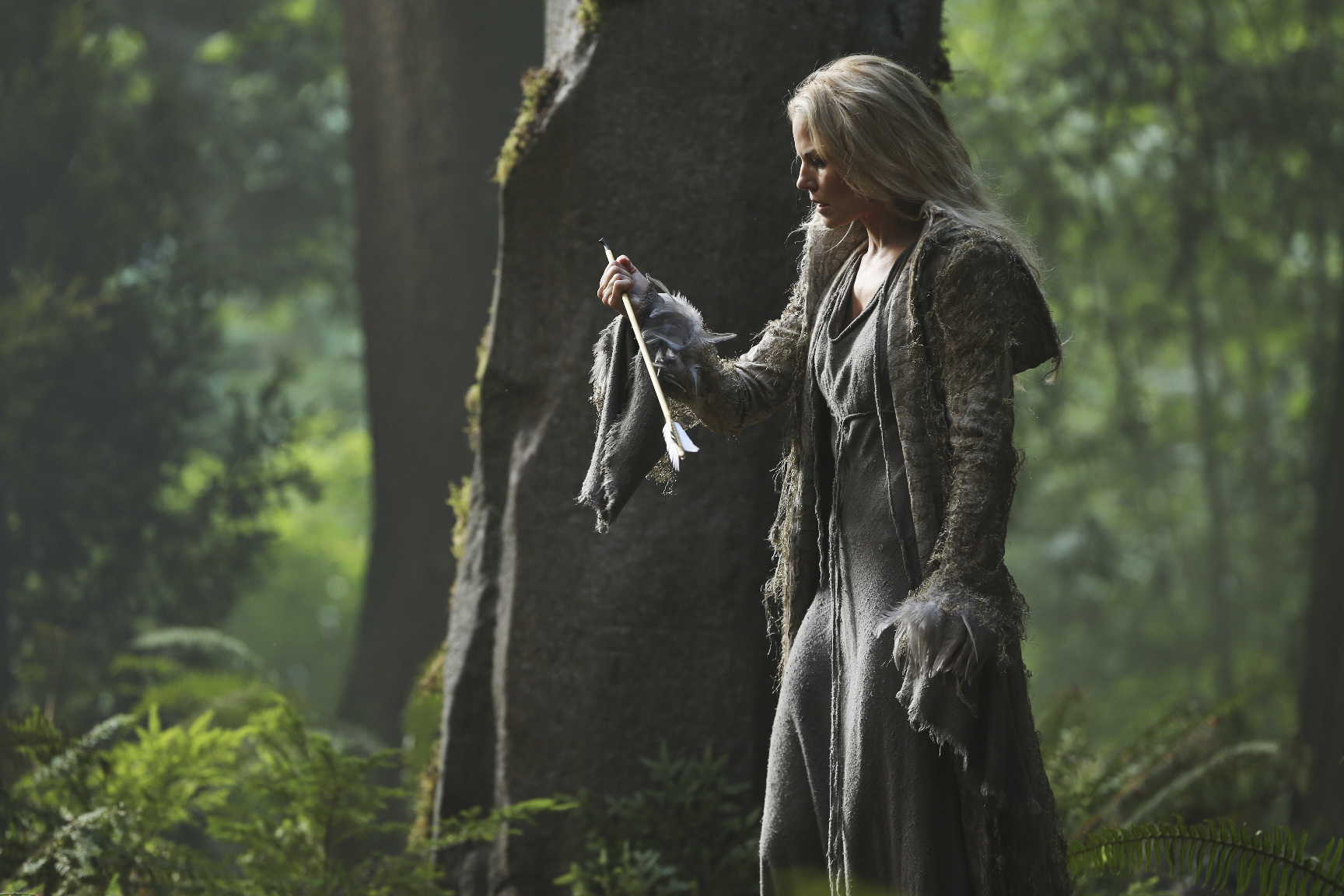 Once Upon a Time Season 5 is two episodes in, and weaves a tale that’s part Disney princess, part fairy tale and part legend. The series is stretching beyond its normal borders, looking for fresh material; instead of relying almost exclusively on Disney characters, Once Upon a Time has introduced Storybrooke’s residents to King Arthur and Camelot. So, how’s it working out?

There’s something terribly likeable about Jennifer Morrison, who plays Emma Swan. She won’t be winning any Emmys any time soon, but somehow she exudes such an affable personality that we can’t help but root for her.

However, she’s become the Dark One, the bad guy, in Once Upon a Time Season 5. I have mixed feelings about this. Mostly, I’m happy to see Morrison get a chance to flex some acting muscles that usually lie dormant while she’s playing a hero. You can see she’s having fun being wicked, for a change. Plus, her black wardrobe is fetching, sleek and modern, but slinky and evil.

But Morrison isn’t nearly as gleefully evil as Lana Parilla when she’s the Evil Queen, or Robert Carlyle as Rumpelstiltskin. Her performance feels more like Emma is pretending to be Dark. She’s treading too lightly. Go for it, Jennifer! (Maybe you, like I, have figured out why she went Dark when she was trying not to. Um, price to be paid for magic used to bring back Robin from the dead? I bet there are more scenes like that ahead.)

And I gotta say, for a show that’s owned by Disney and airs on one of the big three networks, the budget should be big enough to get Jennifer Morrison a decent wig, rather than coloring her hair white with spray-on snow. That nasty hair really distracts me from the show. ONCE UPON A TIME – “The Price” – (ABC/Jack Rowand) SEAN MAGUIRE, LANA PARRILLA

In previous seasons, I didn’t enjoy watching Regina become a hero. Regina is much more interesting, and motivated, as the Evil Queen. But, in Once Upon a Time Season 5, it’s a pleasure to watch her being a good guy, for a couple of reasons.

First, she’s playing counterpoint to Emma’s Dark One. Previously, when Regina was the good guy, she was one of a crowd of them, which made her too common and uninteresting. This season, with Emma as the big bad, Regina can claim more of the spotlight with her good intentions and sacrifices.

Plus, we’re watching her struggle with her new identity, feeling insecure and timid. I love watching her step up against, say, the Fury or her sister; the combination of her powerful magic and her shiny new hero feelings makes her look like a kid riding a roller coaster for the first time.

Regina is clearly the star of the first half of Once Upon a Time Season 5. ONCE UPON A TIME – “The Price” – (ABC/Jack Rowand) JOSH DALLAS, GINNIFER GOODWIN

On a show that has an ensemble cast that’s as numerous as the population of Liechtenstein, I understand that everyone has to share dialogue and storylines. But Snow White and Prince Charming have become little more than background scenery. In fact, I don’t think Charming spoke a single line in the Once Upon a Time Season 5 premiere. (I’d have to watch it again to be sure, but I’m pretty sure.) In the second episode, the two of them had a nice scene with Regina when they taught her how to dance, but outside of that, these two are seeing zero action. Have they had plenty of screen time previously? Yes. But it seems like such a waste to have two characters who were the stars of the show hang out on the sidelines.

And, costume folks, what gives with the washed-out-Joseph’s-coat-of-many-colors that poor Mary Margaret has been sporting since the end of last season? I know Ginnifer Goodwin had a baby, but Merlin’s beard, get that woman something attractive to wear! She looks like she’s ready for a cotton candy shoot-out. Pink loafers? Please.

Some of the other aspects of Once Upon a Time that are working for me are: Henry isn’t nearly as annoying as he usually is; Regina called Hook “Guyliner.”

Other parts of the show that have grated my nerves continue to do so:

Not only is Belle as simpering and bland as ever (Emilie de Ravin delivers every line like it’s an apology), now she’s carrying around a magic rose in a glass case, ’cause that’s not at all awkward when you’re traveling between realms. Where’s Merida? Was that seriously all we’re going to see of her? ABC, you tease us all summer with glimpses of her curly, red hair and her trick-shot archery skills, then snatch her from us before the first episode of Once Upon a Time Season 5 is even over? Poor form! ONCE UPON A TIME – “Siege Perilous” – (ABC/Jack Rowand) LIAM GARRIGAN

King Arthur is just the dark-haired version of Charming. Boring, meet Boring. I can only hope that whatever Camelot’s secret is, the one that was hinted at, makes him more than “meh.”

And Robin. Talk about flipping the script. That dude has “damsel in distress” down pat. The feminist in me loves that he’s essentially every female character in any action movie ever — always needing rescued, trying to raise his kid alone, begging someone to love him — but, ugh, his perpetually puzzled face makes me stabby.

Megan Ory as Ruby on ‘Once Upon a Time’ / ABC

Most annoying of all, where’s Ruby? The executive producers say she’s coming back. Meghan Ory, who plays Ruby (Red), was one of the best actresses they’ve had, and her wolfy nature is terribly handy to have around when you want to track someone. I love watching Ory have so much fun with her character. Jennifer Morrison should take notes.