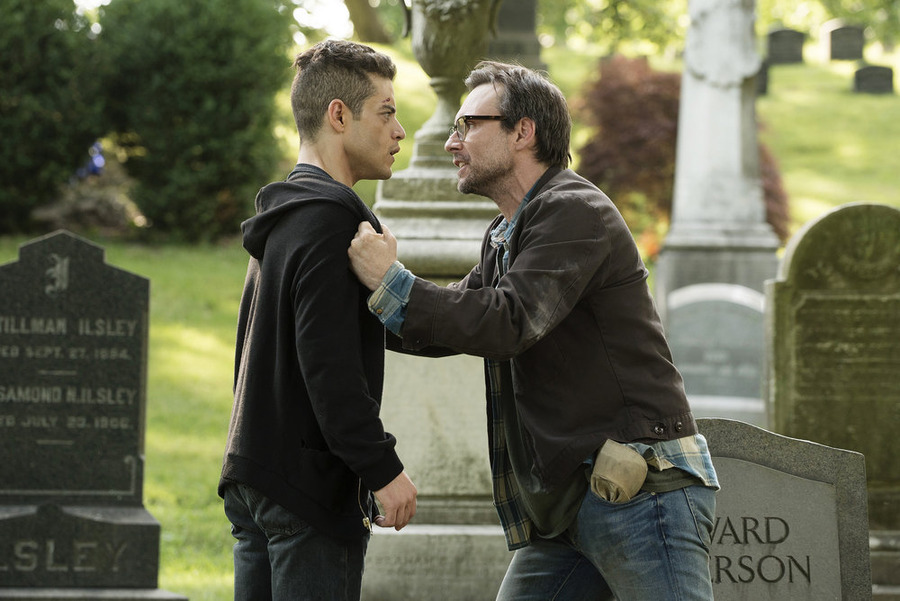 Mr. Robot, USA’s runaway summer hit TV series, is intense. It pulls you in and, before you know it, you’re blinking at the closing credits. Part of the reason you can’t look away is that you spend most of the episode just trying to figure out what’s going on, and what’s coming next. As TV viewers, we’ve become so jaded that we can usually predict the plot of a show. Not so, with Mr. Robot.

Synopsis: Mr. Robot is a techno thriller that follows Elliot (Rami Malek, The Pacific), a young programmer, who works as a cyber-security engineer by day and as a vigilante hacker by night. Elliot finds himself at a crossroad when the mysterious leader of an underground hacker group (Christian Slater, The Adderall Diaries) recruits him to destroy the firm he is paid to protect. Compelled by his personal beliefs, Elliot struggles to resist the chance to take down the multinational CEOs he believes are running (and ruining) the world. This contemporary and culturally resonant drama also stars Portia Doubleday (Her), Carly Chaikin (Suburgatory) and Martin Wallström (Simple Simon).

You would be hard-pressed to find a more hot button TV show than Mr. Robot. The series is all about protecting your online identity (hello, Ashley Madison!) and corporate greed. (The logo for the show’s Evil Corp. is Enron’s “E,” for goodness sake.) Creator Sam Esmail told The New Yorker that Mr. Robot was inspired by his years being an angry young man, especially in college. One wonders if he was also as introverted as poor Elliot, who seems to suffer from a thyroid issue, as well as a morphine addiction.

Mr. Robot spoke to me.

Last week I visited the official Mr. Robot website. I haven’t had that much fun on a website since ’90s when Flash became prolific. While computer code scrolled across my screen, Mr. Robot tested me to see if I was fsociety material. After making the mistake of typing in my real name (“YOU NEVER USE YOUR REAL NAME!”), I was able to pass the test. Although, Mr. Robot said I still have “too much heart.”

Today, I got an email with the subject, “No More Waiting,” and here’s what Mr. Robot sent me. Clicking the image took me to a glimpse of my future after fsociety’s take down of Evil Corp. You see, tonight is the Mr. Robot finale, which was originally scheduled to air Wednesday, August 26. However, the episode was pulled after the terrible shooting of two TV news reporters, because the network said the episode depicted events that were too similar. I can only imagine just how high the stakes will be. Plus, every single press image for tonight’s episode is shot in a cemetery, so, look for someone to die.

With a near catatonic protagonist, a smart blonde damsel who refuses to be in distress, a female hacker whose lips scoff at Angelina Jolie’s, Christian Slater as he was meant to be (think Heathers and Pump Up the Volume), and a plot that is the perfect example of art imitating life, Mr. Robot is the smartest, most fascinating, and well-acted TV show I’ve seen in a long, long time.