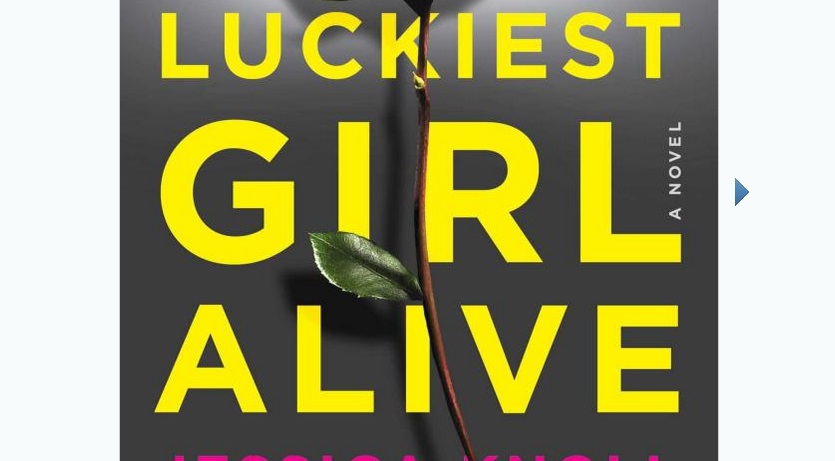 Luckiest Girl Alive, by Jessica Knoll, is a smart, funny, surprising well-written book that keeps you reading and guessing until the very end. Maybe “guessing” is the wrong word. Although the narrative twists and turns, every surprise is earned and reasonable. The easy, lived-in, realistic voice of the narrator marks Knoll as the kind of writer who can blur the lines between popular and serious fiction. With a little less plot, this could have been a modern The Group via the most unlikable Ann Tyler narrator. But I get why it didn’t go that way. Mary McCarthy inspired a thousand The Group clones over the years and we don’t need another. And Luckiest Girl Alive is anything but sedate. Knoll takes on class, sexual violence, actual violence, relationships with parents, and, perhaps most interestingly, the idea of expectation and what we want for ourselves. Luckiest Girl Alive, pick it up for the characters, stay for the plot.

(By the way, I mean The Group as a compliment. I loved that book. You rock, Mary McCarthy!)

(By the way, I know McCarthy’s dead.)

Books like Luckiest Girl Alive are always troubling for me because it’s sometimes difficult to separate the author and the first-person narrator, who in this case is a successful Manhattan twit who is so class conscious that she can sum people up by what kind of handbag they carry (Hint: the expensive ones aren’t necessarily good). Are we criticizing the shallow pursuit of adult beauty and popularity, which is always a little more sad and desperate than the high school pursuit of beauty and popularity? Or are we celebrating it? And the book is so of the time, continually overestimating my knowledge of Kate Middleton and making me wonder how long it will be before the word “uber” is virtually meaningless. If I hadn’t read a few good reviews, I might have pitched it aside as too glib, blasé, and everything that is wrong with Manhattan — the unwritten rules of dress, action, and class that cast people into the very opposite of what New York promises. Instead of renewal and freedom, they try to live up to the expectations of unimportant nimrods who think they know how you should dress, act, and purchase. And I might have thought that the author actually believed those things. Trust me when I say that, by the end, you realize that the author has a lot to say about shallow pursuits.

The narrator, TifAni FaNelli, is damaged by her tragic, violent past, to say the least. But she seems to have been just as shallow before that, so perhaps she is in a state of actual arrested development. But most of the other people around her, the ones she respects, seem to be just as class and status conscious– part of it is not appearing to be class or status conscious, but noting all the while the way one, say, discards an oyster. In short, the book is about a bunch of assholes and, in flashback, a bunch of evil assholes… for a while. Again, the first 100 pages was a little difficult to get through. But read assured, Jessica Knoll is in complete control of this book and every issue that the narration brings up is dealt with.

Luckiest Girl Alive is told in alternating chapters, the “Present” and then high school. In the Present, TifAni is planning her wedding to a shallow rich boy, working at a woman’s magazine as the sex article girl, and contemplating taking part in a documentary about an event in her past that isn’t quite clear at the beginning of the story. In the flashbacks, TifAni has just transferred to a new school and is trying to make friends.  Those chapters start out all about clothes, labels, and all the body image problems one has in high school. But there is a lot of narrative drive and it would have been very difficult to throw the book away just because everyone in it is so awful. You want to know what that awful thing was.

By the way, yes, TifAni has one of the worst names I’ve ever read in a book. I know it was supposed to be that way, but yikes. And I also feel like there aren’t really many people out there with names like that. Could it be a Philadelphia thing?

In the “About the Author,” it mentions that Jessica Knoll was a magazine editor at Cosmopolitan and it makes me wonder if that’s what got this book published. Often, the beginning of the book has to be better than the end to get agents and editors reading. Of course, the beginning is well written, but not likable. Someone had a lot of well-deserved faith in Knoll. And it works to the reader’s benefit. I’m not complaining! This seems like old-school publishing. I like to picture William Faulkner sending The Sound and Fury to an editor today and getting a letter back that he should maybe read a grammar book.

Luckiest Girl Alive has been compared to Gone Girl in every review I’ve seen, even on the cover of the book. Don’t get me wrong, Gone Girl was a fun read and I really enjoyed it (come to think of it, Gone Girl was also by a former magazine editor), but the hook for that book was very different. Instead of “unreliable narrator and the press,” I picture Knoll saying, “I know a lot about the psychological aftermath of violence.” To carry on the Gone Girl comparison, for me GG falls apart in the middle and I felt like I could feel an editor tapping the book and saying, “We need a complication here,” the couple who rob Gone Girl in the motel. No such issues with Luckiest Girl Alive.

I’m always uncomfortable with the idea of saying that a book about awful things is a good read (A Light in August, a great summer read!), but in the case of Luckiest Girl Alive, it is absolutely true. Too often, popular books succumb to wish fulfillment rather than realistic drama. And don’t get me wrong, some of those books are great. But sometimes books can surprise you by making you like twits, understand them a little better, and root for them. Luckiest Girl Alive is well worth spending the initial time with the twits.