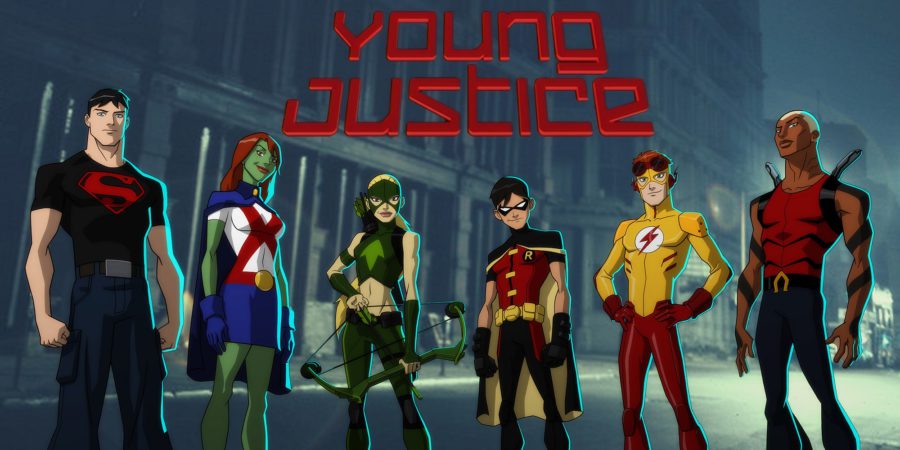 Young Justice focuses on the Justice League wannabes, who are apprentices to the members of the Justice League. Robin (Dick Grayson), Superboy (Connor Kent), Aqualad (Kaldur’ahm), Artemis Crock, Miss Martian ( M’gann M’orzz), and Kid Flash (Wally West) make up the original team of members. Zatana, Speedy (Red Arrow), and Rocket come in and out, as well.

The Young Justice team trains in a cave, set up by Batman. To prove themselves worthy of the Justice League, they take on villains, like the League of Shadows, Lex Luthor, the Injustice League, and The Light.

Young Justice is delicious to binge-watch. Even though the characters are beloved and familiar, the storylines are unique, because the Young Justice episodes do not follow the DC universe timeline.

“Auld Acquaintance” The Team of Young Justice members engage in a fierce battle with Red Torndao, to free the Justice League members from being brainwashed.

“Bloodlines” Roy Harper is rescued from the League of Shadows. Through time travel, The Flash, Kid Flash, and Impulse defeat Neutron. Justice League is one of the best superhero TV cartoons ever created. (The other being The Avengers: Earth’s Mightiest Heroes.)  There’s very little humor, but a lot of epic storytelling. Justice League takes being a superhero seriously. The material is thoughtful and smart.

“Destroyer” The series finale is very fulfilling and action-packed. The Justice League teams up with the bad guys, the Secret Society, to defeat Darkseid, who wants to take over the entire planet.

“Divided We Fall” The Flash is taken to the edge of a scary precipice. He has to push his speed to the limit in order to pull apart Lex Luthor and Brainiac, who have fused. He is nearly pulled into the Speed Force forever. Justice League cartoons generally have great casts, but Superman: The Animated Series has an especially top-notch group of actors. Tim Daly as Superman, Dana Delaney as Lois Lane, and Clancy Brown as Lex Luthor, kept a nice note of gravitas in their dialogue.

Superman: The Animated Series combines the traditional idea of Superman from the Silver Age of Comics, with the modern notion of a superhero, who has to work to use his powers and defeat foes.

“World’s Finest” In this trilogy of episodes, Batman and Superman team up against The Joker and Lex Luthor.

“Speed Demons” Superman and The Flash team up against the Weather Wizard.

“The Demon Reborn” Batman and Superman are again partners, against Ra’s Al Ghul, who comes to Metropolis. Justice League: The Flashpoint Paradox was released straight to home video. This feature-length Justice League cartoon is based on the amazing comic book crossover, Flashpoint. After defeating several members of the Rogues Gallery, The Flash finds himself in a war-torn alternate timeline.  Eventually,  Zoom (Eobard Thawne) reveals that Barry himself is responsible for this terrible timeline.

Some of the plot twists are mind-bending, and the ending may leave you with too many questions. But the storytelling digs deep and the stakes are very high. The Super Powers Team Galactic Guardians was short-lived, but entertaining. Cyborg plays a big part this time around, fighting alongside Robin, Batman, Superman, Wonder Woman, Firestorm, Hawkman, and Green Lantern. The Justice League battles Darkseid, a dark new god who wants to take over the planet.

“The Death of Superman” It doesn’t get much heavier than this. Superman dies while he’s visiting a planet where he is exposed to a great amount of Kryptonite. Firestorm was with him, but couldn’t save him. He’s so distraught he flies away and leaves the team. The rest of the Justice League members send Superman’s body into the sun, then head off to the Fortress of Solitude. Darkseid wants to be sure Superman is gone, so he captures Firestorm, who is forced to tell the story.  Darkseid makes plans to invade Earth.

#6 The Superman/Aquaman Hour of Adventure Don’t let Robot Chicken fool you; Aquaman used to be popular. The Superman/Aquaman Hour of Adventure aired in the ’60s. This series took segments of Justice League cartoons that already existed, and strung them together for 60-minute episodes. The main action centered on Aquaman, his wife, Mera, and Aqualad. The Atom, The Flash, Green Lantern, Hawkman, and Superman all guest star.

“Between Two Armies” The Justice League has to negotiate peace between the Rock People and the Crystal People of Mercury, who are using Earth as their battlefield.

“Bad Day on Black Mountain” All the members of the Justice League are captured by a warlord named Mastermind. He imprisons them in the desert to keep them from ruining his plans.

The World’s Greatest Super Friends starred one of the most iconic duos of the 20th Century, the Wonder Twins, Zan and Jayna.

“The Planet of Oz” Mister Mxyzptlk abducts Superman, Wonder Woman, and Aquaman. He takes them to his version of Oz, so he can use them to find the Wizard. The Batman/Superman Movie: World’s Finest sees a mash-up of Batman’s and Superman’s worlds. Lex Luthor hires the Joker to visit Metropolis and kill Superman. Plenty of favorite DC characters show up for this Justice League cartoon, including Harley Quinn, Lois Lane, Commissioner Gordon, and Alfred. So, this time around, we get to see not only a mix of superheroes, but also a mix of villains.

#9 Challenge of the Super Friends

Challenge of the Super Friends is the full name of Super Friends, from the ’70s. For years, this Justice League cartoon was synonymous with Saturday morning. It was a huge hit, mostly because it was the first real attempt to flesh out superheroes as characters. Super Friends found a nice balance of campy humor and serious storytelling. The Justice League members were friends with Wendy, Marvin, and Wonderdog, who spent most of their time solving mysteries.

“The Fantastic Frerps” King Plasto has been intercepting every shipment of raw plastic powder on its way to the government space research station, because he intends to use the raw powder for his own means.

“Gulliver’s Gigantic Goof” Dr. Gulliver uses his microwave reducer to shrink every adult human being in the world down to a convenient size of 2″ tall. The ’80s version of Super Friends starred Aquaman, Batman, Robin, Superman, and Wonder Woman. They were joined by the Wonder Twins and Gleek, a blue space monkey. The villains were traditional DC villains, like Lex Luthor, the Riddler, Sinestro, and Gorilla Grodd.

“The Revenge of Doom”  In this delicious episode, the League of Doom gains control of the Hall of Justice. The Super Friends have to find a way to reverse the effects of Lex Luthor’s weapon and save Metropolis.

Thanks for reading! Which DC cartoon is your favorite? Tell me in the comments!