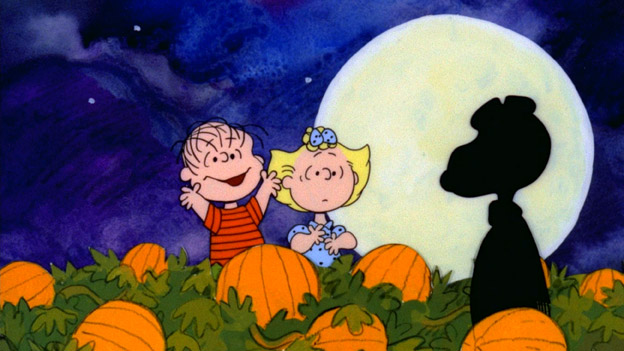 It’s the Great Pumpkin, Charlie Brown is based on the famous comic strip by the late Charles M. Schulz, titled Peanuts. After the success of the first Peanuts holiday cartoon, titled A Charlie Brown Christmas, producer Lee Mendelson and animator Bill Melendez decided to create a Halloween cartoon special. It’s the Great Pumpkin, Charlie Brown, which premiered on CBS on October 27, 1966, was executive-produced by Lee Mendelson and created and written by Charles M. Schulz. Bill Melendez served as producer and director and Vince Guaraldi was the music composer. In the half-hour animated special, the Peanuts kids celebrate Halloween, with Linus hoping that, finally, he will be visited by The Great Pumpkin. He explains to Charlie Brown, and anyone else who will listen, that you must be worthy in order to receive a visit from the Great Pumpkin. He even convinces Sally, who is smitten with Linus, to forgo trick-or-treating and wait with him in the pumpkin patch.

Meanwhile, Charlie Brown is invited to a Halloween party for the first time. He goes trick-or-treating as a (sad) ghost with Lucy, Pigpen and their other friends. While his friends get candy and money, Charlie Brown famously says, “I got a rock.”

In a break from the main stories, for the first time, we see Snoopy as a World War I flying ace, who battles the Red Baron. Snoopy flies his dog house in an effort to defeat his nemesis, but winds up crashing in “enemy territory” until he finds his way to the Halloween party.

At the party, Violet uses the back of Charlie Brown’s bald head to sketch a design for a Jack o’ Lantern. Lucy is caught in a kiss with Snoopy when he surprises her at apple bobbing.

Back at the pumpkin patch, Sally realizes she’s been duped when the only shadowy figure to appear is Snoopy in his costume. She storms off in a temper, leaving Linus to eventually fall asleep in the pumpkin patch, hopeful for next year.

Cast members varied in each Charlie Brown cartoon special. Following are the characters and who played them. It’s the Great Pumpkin, Charlie Brown is still, more than 40 years after it’s premiere, the most popular and beloved Halloween cartoon special to air every year. Parents have passed on their love of Snoopy and the gang to their children, settling in on a crisp fall night to watch poor Linus wait in that chilly pumpkin patch for the Great Pumpkin; Charlie Brown go trick-or-treating in a holey sheet and only have a rock to show for his efforts; and Snoopy go down in flames after battling the Red Baron.

The rounded, subtle style of creator Charles Schulz is animated simply, but effectively, to tell the story of the children’s Halloween night. The charming voices of the children who played the Peanuts gang relate the excitement, and disappointment, all children feel at times. The beautiful backgrounds provide warmth and beauty to the lightly shaded characters. Smaller ones may get a little bored or confused when Snoopy becomes the World War I Flying Ace, but everyone will want to watch It’s the Great Pumpkin, Charlie Brown every year.

On October 2, 1950 the Peanuts comic strip launched in seven American newspapers. Peanuts animated specials have become a seasonal tradition. Charlie Brown kicking the football, Linus and his blanket and Lucy leaning over Schroeder’s piano are images all generations can easily call to mind. Phrases such as “Good grief!” and “You blockhead!” have become a part of pop culture. The Charlie Brown network specials won five Emmys, two Peabodys and 18 other Emmy nominations.