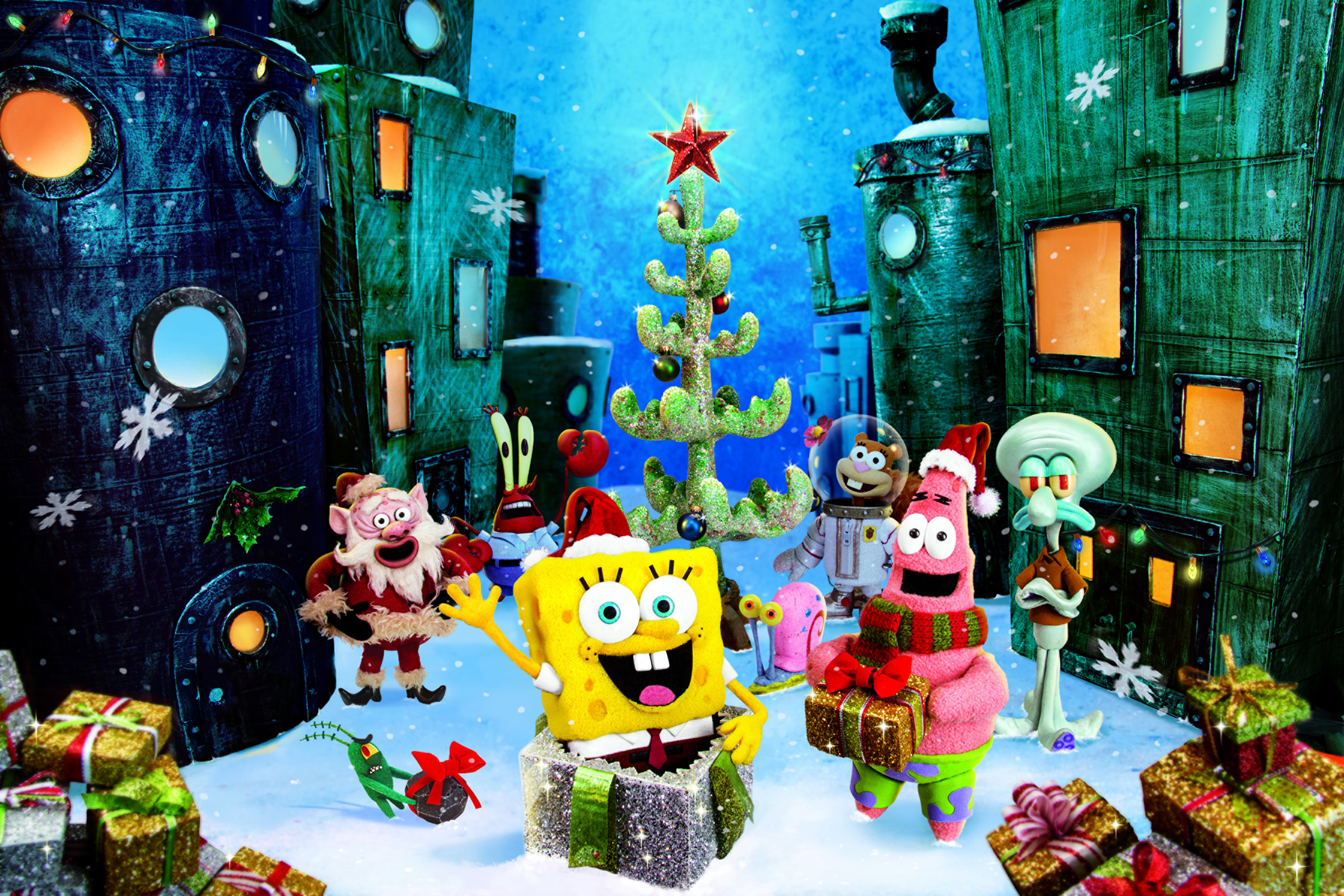 It’s a SpongeBob Christmas! is the first full-length, stop-motion animated episode of SpongeBob SquarePants. That means that in this episode, rather than using traditional, 2D animation that is drawn, colored and animated, the production team used 3D models of the characters and locations, snapping a shot every time they move a millimeter; then all of those snapshots are strung together to make it appear as if action is taking place. (Picture what kids used to do with their Super 8 cameras and action figures.) The result is a life-like and textured representation of Bikini Bottom and its inhabitants. (Perhaps the animators enjoyed the taste of stop-motion animation they got when working on the Abominable Snow Mollusk in 2011’s “Frozen Face-Off” and wanted more.)

According to the press release, six sets were going at one time where 60 lbs. of baking soda was used as snow, 42 lbs. of glitter added sparkle, 22 lbs. of wood chips created Sandy’s tree house floor and 20 boxes of breakfast cereal covered the coral rocks.

In It’s a SpongeBob Christmas!, SpongeBob and the rest of Bikini Bottom are getting ready for a visit from Santa Claus. While some of the residents are decorating their homes, Plankton is putting the finishing touches on his latest evil invention: fruitcake that turns someone who eats it into a jerk.

Plankton’s first hapless victim is SpongeBob, who gobbles the slice of fruitcake happily. However, he remains his normal, happy-go-lucky self. Discouraged, Plankton keeps feeding SpongeBob slice after slice to no avail. Finally, Plankton gives SpongeBob his invention, thinking it’s a failure.

SpongeBob decides to share his good fortune, giving parade watchers their own slices of fruitcake. One by one, each character turns into a jerk. (Jerks, by the way, have heavy uni-brows and five o’clock shadows. Pearl’s transition is easily the funniest part of the episode.) Now the town is full of jerks, wreaking havoc and battling each other.

SpongeBob begins singing “Don’t Be a Jerk (It’s Christmas)” and turns the jerks back into normal folks. Turns out SpongeBob was immune to the jerk fruitcake because of his loving heart.

It’s a SpongeBob Christmas! also includes a SpongeBob robot and an appearance by Santa Claus, but why spoil everything?

It’s a SpongeBob Christmas! opens just like a classic Rankin/Bass Christmas cartoon, such as Rudolph the Red-Nosed Reindeer. Animated painted snow falls over a sweet stop-motion animated scene that focuses on a toy-like Patchy the Pirate, looking like the mailman in Santa Claus Is Comin’ to Town, driving with his parrot, Potty. Though the scene appears to be innocently charming, soon the silly humor we’ve come to love assures us that, yes, this really is a SpongeBob SquarePants cartoon: Patchy and Potty come to a fork in the road, literally, and the fork flattens their tire.

Although stop-motion animation requires clever eye-trickery, It’s a SpongeBob Christmas! manages to re-create the kind of action we see in the traditionally animated SpongeBob SquarePants cartoon, with characters stretching and shrinking, objects flying and exploding. I am stymied as to how Plankton throws his keys to SpongeBob with no wires in sight.

All the primary characters from SpongeBob SquarePants are in this episode, along with the handful of towns-fish we see from time to time. The likenesses of the characters are fairly close to their 2D counterparts. However, Patrick and Mr. Krabs, the “husky” characters, don’t seem to be the right proportions; they aren’t wide enough in the hips or something; I can’t put my finger on it.

The cartoon’s locales are re-created to look like the best toy playsets you’ve ever seen. From SpongeBob’s pineapple to the Krusty Krab, the textures and details are so inviting you want to break out your action figures and grab a set from the TV.

What bothered me most about this episode was the use of foam to create the characters, rather than a smooth plastic or some other modeling substance. I expected SpongeBob and Patrick to look rough and, well, spongy, but I expected Plankton and Mr. Krabs to be smooth, more like the characters in the Rankin/Bass Christmas cartoons I mentioned earlier. Plankton’s foam texture bothered me, though his eyebrow was perfect.

The way Santa is depicted in It’s a SpongeBob Christmas! was also disturbing. When we first see jolly ol’ Santa, he seems to be looking down at Bikini Bottom through an aquarium, with his beard floating in the water and creepy, bulging eyes swimming back and forth.

Later, when Santa arrives in Bikini Bottom to hand out presents–or coal, depending– he looks like a pig with liver spots. I am very curious to know why Santa wasn’t styled in a more attractive and traditional way.

Though I disagree with a few of the animator’s choices, this Christmas special is a treat. The DVD includes fun extras, like downloadable versions of “Santa Has His Eye on You” and “Don’t Be a Jerk (It’s Christmas.)” The behind-the-scenes featurette gives you a peek into how the characters and sets were created. “I associate Christmas with stop-motion,” said Chris Finnegan, Animation Supervisor, “It’s almost like toys come to life.”

‘The Story of Santa Claus’ Review