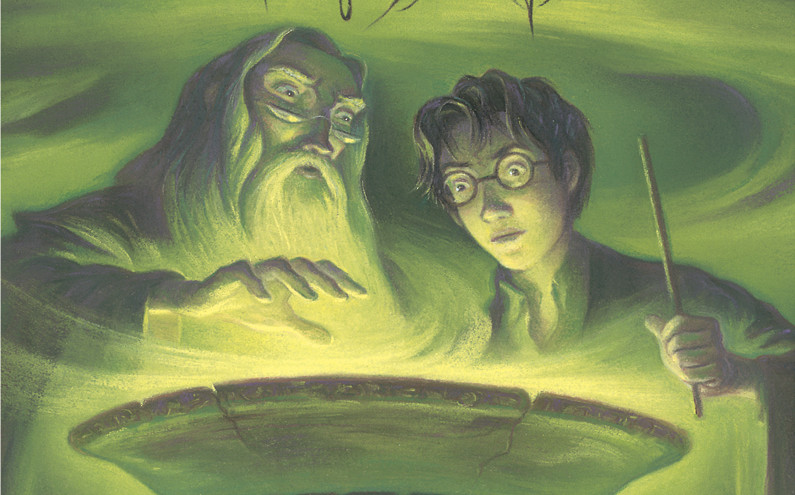 Disclosure: Some of the links in this blog post are affiliate links. Media Medusa earns a small commission, at no extra cost to you, when you buy something through these links.

Harry Potter and the Half-Blood Prince isn’t my favorite book in the Harry Potter series for a number of reasons. The first reason is that it begins with a somewhat tedious chapter (sorry, Jo) that’s meant to catch up the folks who haven’t been reading the preceding books religiously, and to set up the events to come. A conversation between the Prime Minister and former Minister of Magic, Cornelius Fudge, just isn’t terribly engrossing. Another reason it’s not my favorite book in the Harry Potter series is all the teen romance drama. I’ve discovered I may be in the minority in this; several fans I’ve spoken to, including my own family members, enjoy the love triangle of Hermione, Ron and Lavender. I find it all rather silly, but perhaps I am reminded too much of my own silly youth. Conversely, I do enjoy watching Harry and Ginny come together as a couple, probably because I’m just so thankful Harry has some happiness in his life.

The final reason I don’t enjoy Harry Potter and the Half-Blood Prince is because the entire book has the feel of a penultimate chapter. Yes, incredible events take place, including one of the most important events in the series: the death of Dumbledore. But even the death of such an important character merely feels like it’s part of a prologue to what we know is coming: the inevitable battle between the Death Eaters and the good guys, and the fight between Voldemort and Harry.

Save the Best for Last

Harry Potter and the Half-Blood Prince, however, is brimming with information and stories that will become important only later, even stories that, after reading the entire series and looking back, clarify so much about what led to that final duel. And about Dumbledore and the Resurrection Stone. In fact, Harry Potter and the Half-Blood Prince is really about Dumbledore, although you don’t necessarily realize it at the start.

After the tedious first chapter, Dumbledore arrives at Number 4 Privet Drive to escort Harry to the Burrow. Harry notices Dumbledore’s hand is blackened, but when he asks about it, Dumbledore politely puts him off. We, too, put the matter aside, until it’s brought to our attention again, later in the book. Each time Harry asks about the damaged hand, Dumbledore delays explaining.

Sadly, Harry never gets to hear Dumbledore tell his thrilling tale. Dumbledore is killed at the top of the Astronomy Tower before he can tell it. One gets the sense, throughout the entire book, that Dumbledore is purposely keeping his story to himself. Dumbledore is very intelligent, and uses his words wisely. So, if he wanted to tell Harry how his hand came to be injured, he would have made sure that there was a time and a place for it.

The question becomes, why doesn’t Dumbledore tell Harry about his blackened hand? The answer is that to do so, he would have to reveal something about himself that he did not wish Harry to see. He would have opened himself up, bared his heart and soul, and exposed what he probably considered to be his worst shame.

The Trouble with Hallows

After reading Harry Potter and the Half-Blood Prince, we know that Marvolo Gaunt’s ring, the one Dumbledore tells Harry he found at the old Gaunt home, was a Horcrux. We also know that Dumbledore had a difficult time destroying it. When Dumbledore doesn’t explain his blackened hand, we assume that the Horcrux put up a good fight and somehow injured him. But that was not the case.

We also learn more about Dumbledore in Harry Potter and the Deathly Hallows, like the fact that Aberforth, the owner of the Hog’s Head, is his brother. And we find out he had a sister, Ariana, who suffered a horrible attack at the hands of Muggles when she was a child, an attack that left her not quite right. As Harry pieces together Dumbledore’s past, from conversations he has with Elphias Doge and Aberforth, and from reading Rita Skeeter’s horrible biography, The Life and Lies of Albus Dumbledore, we get a clearer picture of the young Dumbledore, who is very different from the Headmaster who takes Harry under his wing.

When Dumbledore was young, he and Gellert Grindelwald, who is later imprisoned, imagined reining in Muggles for “the greater good,” using the Deathly Hallows. They became obsessed with the Deathly Hallows. Dumbledore was completely focused on his own ambitions, even after his mother, Kendra, died and he was left to care for his brother and sister. He neglected them, which made Aberforth resent him terribly. The tension between Albus and Aberforth came to a head in a three-way duel between the two brothers and Grindelwald. Sadly, Ariana was hit and killed. We can only surmise that Ariana’s death forced him to mature and become more selfless, although the damage was already done. At this point, Dumbledore must have taken a turn away from his original path, because we know he defeated Grindelwald (who was also his lover, as J.K. Rowling later revealed), and he became a champion for Muggles. He spent the rest of his life eschewing power (he was asked many times to run for Minister of Magic and refused), and trying to do enough good in the world that he could assuage his guilt over Ariana’s death.

Regrets, I Have a Few

Now, imagine, Dumbledore enters Marvolo Gaunt’s home, many years after the death of his little sister. He finds the Resurrection Stone, which is said to bring back the dead. Can you imagine how conflicted he must have been? He needed to destroy the piece of Voldemort’s soul that was living in the ring, but here, after so long, was his chance to see his sister and beg for her forgiveness.

We know how the Horcrux spoke to Ron in Harry Potter and the Deathly Hallows, how it played on Ron’s fears and insecurities. So, imagine what the Horcrux would have said to Dumbledore, or shown to him, to try to keep him from destroying it. Dumbledore, feeling so guilty and having become such a good person, couldn’t resist putting on the ring and trying to keep his sister alive, with him. But, dark magic was at work and if he hadn’t acted as quickly as he did, he would have died instantly, rather than walk away with a blackened hand.

Dumbledore never told Harry how his hand was blackened because he did not want Harry to know that he had had a moment of weakness. He did not to explain why he had tried on the ring, which would mean revealing his greatest regret. Finally, I also think he did not want to explain the Deathly Hallows to Harry, face to face. Perhaps in doing so, he would have revealed his obsession with them (remember how he secretly kept the Invisibility Cloak for a while?), or revealed that previously, he had quested for power.

Trying on Marvolo Gaunt’s ring was one of very few mistakes Dumbledore made in all seven books. Being a man who rarely makes mistakes, I’m sure he was reluctant to admit his error. And, no doubt, in telling the story, he would have to re-live the scene that would haunt him until his end: the death of Ariana.