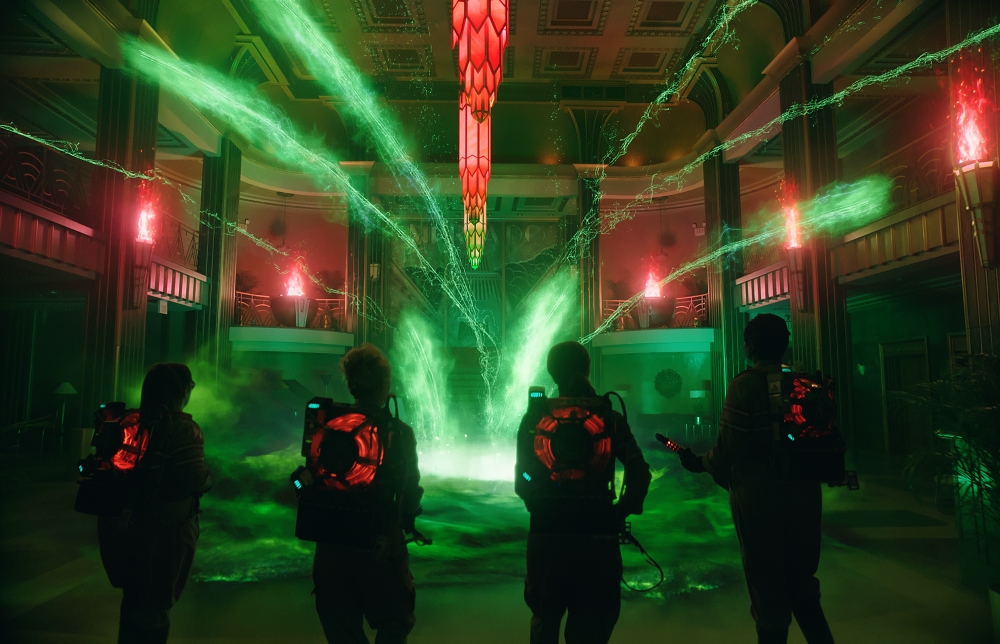 The 2016 version of Ghostbusters stars Kristen Wiig (Bridesmaids), Melissa McCarthy (Spy), Kate McKinnon (Saturday Night Live) and Leslie Jones (Saturday Night Live) as the titular characters. The playbook is similar to the original movie. Someone is luring ghosts to New York City. Three scientists and one layman set out to save the Big Apple from said ghosts. However, they have to battle more than ghosts. They also take on City Hall, when the Mayor’s office attempts to paint them as frauds.

The first thing I loved after I realized Ghostbusters is a feminist movie, is that nothing whatsoever in the movie points out that Ghostbusters is a feminist movie. Not one character ever says, “But you’re just women. You can’t be scientists.” Or whatever. In most movies that tout themselves as being feminist, there’s someone, usually a male character, who points out that they’re women and can’t do the job. NO ONE says that in Ghostbusters. Not the mayor, not the bad guy, not even Tywin Lannister at Columbia Unviersity. When Tywin (it’s actually the actor Charles Dance, Game of Thrones) fires Wiig’s character, it’s because she made a fool of herself, not because she’s a woman.

In fact, these ladies kick spectral ass in several scenes, and not once does a man try to take the reins or imply they aren’t fit for the job. The bad guy taunts them once, saying, “You shoot like girls.” But it’s a throwaway line, and he is the bad guy. Only a bad guy would say something sexist like that, right? The other reason Ghostbusters is a feminist movie is that the women’s looks are never — not once — commented on. There’s not a single joke about someone’s weight or hair or attractiveness.

If you’ve seen the movie, you’re already arguing with me. Let me address your arguments. When the Mayor talks about how the ladies are drawing too much attention to themselves, Abby points out that Patty (Jones) wears really big earrings. Patty then makes a joke about how good she looks. Big earrings do draw the eye. And Patty makes a joke about herself, and how good she looks. Nothing bad happening there.

Yes, there are a few jokes about Erin’s (Wiig) clothing choices. But, those jokes aren’t about whether or not she’s attractive in those clothes. Her story is about literally and figuratively loosening up. Those jokes are there to underline how uptight she is.

How can you tell if a joke is sexist? Picture those same jokes being told about a male character, like Harold Ramis (RIP, bro’.) Still works.

Let’s take this idea of commenting on a female character’s appearance even further. Ghostbusters has zero “ugly duckling” storylines. An ugly duckling storyline is when a character (almost always a woman) starts out ugly and then winds up beautiful, usually through the power of a makeover. Sometimes the entire movie is about that, like The Duff or She’s All That or (gag) Pretty Woman. Sometimes writers and producers can’t bear to have a movie with women in it without having at least a secondary storyline about an ugly duckling, like Clueless or Breakfast Club or (I can’t believe I’m saying this) Harry Potter and the Goblet of Fire.

Ghostbusters doesn’t have a single makeover scene. There’s no big fundraiser or wedding or prom that requires these ladies to slather themselves in make-up, yank on Spanx, and spray their hair until it’s so stiff it can hold up the Brooklyn Bridge. They just look like they look. No comments. No explanations. Zero judgments. It’s awesome. If you’re a movie fan, you’ve probably heard of the Bechdel Test. The Bechdel Test is named for Alison Bechdel. She had a comic strip called “The Rule” in her Dykes to Watch Out For. If a movie (1) has at least two women in it, who (2) who talk to each other, about (3) something besides a man, it passes the Bechdel Test.

Again, I hear you arguing with me. Yes, they talk about Kevin (Chris Hemsworth) in a somewhat romantic vein. However, none of the women talk about how to “get” him. More on him later.

The bottom line is that Ghostbusters is head of the class when it comes to the Bechdel Test.

That’s what Agent Rorke (Matt Walsh) says when Kevin, who has been possessed, appears in front of a crowd of police and military personnel. Kevin is played by Chris Hemsworth, who is world-famous for being a beefcake. He’s there for his handsome face and physical fitness. Erin is quite taken with him, even though his skills as a receptionist are lacking. The ladies make a lot of jokes about Kevin being good-looking, but stupid.

I have mixed feelings about this. They go something like this.

It’s funny! Kevin is so stupid that, for instance, he covers his eyes when there’s a loud noise. His character is cleverly written, because his stupidity isn’t run-of-the-mill. He’s stupid in some very creative ways. His stupidity is so funny, that I’m pretty sure my 10 year-old daughter thinks he’s the funniest part of the movie. Now, would a female receptionist’s stupidity be just as funny? Yes. Well, yes and no. If a female receptionist held up two photos of herself in the altogether, and asked her employers which one made her look most like a doctor, the scene would be incredibly sexist. And painful. That’s where my mixed feelings come in. How can I love the fact that the movie doesn’t comment on the women’s looks, but continually showcases Kevin only for his looks? Part of me thinks, “About damn time!” But the other part of me thinks, “That’s not right. It’s hypocritical.”

Then there’s the age-old argument that it’s different to exploit a man for his looks, because there is less danger of his becoming a victim of a violent act. I suppose if all four ladies ganged up on him, he’d be in trouble. On the other hand, there’s also the stereotypical belief that a man would love four women to gang up on him. Presumably, just having testosterone running through your veins is enough to excuse any attention or advances you might receive. Because men want sex all the time, right?

Again, I’m not definite on how I feel about the whole Kevin storyline. In terms of sexism, it’s thorny. In terms of comedy, it’s gold.

Back to the Bechdel Test, the women do talk about Kevin in a somewhat romantic way, because Erin is attracted to him. Thankfully, those conversations to not result in Erin wearing her hair differently or dressing more provocatively to get his attention. In fact, Abby, Patty and Holtzmann (McKinnon) cheer her on a bit when she’s groping him during a dance break. There are those mixed feelings again…

The direction and/or the editing is the problem. The movie is put together in a conversational way that detracts from the jokes. The jokes lose their punch because the camera literally cuts away from someone saying something funny. We need to see them finish the joke. Then we need a beat after the joke, or a reaction take, to give it punch. Because the movie cuts away from the jokes so often, your mind is trained to race ahead and lead the laughter behind.

Beyond that, the writing is smart and the performances are top-notch. Every actor and actress in Ghostbusters is great, from leads to cameos. The casting choices are inspired, like improvisational wiz Zach Woods (Silicon Valley) as the tour guide in the beginning of the movie. Having actors from the original movie in cameo appearances is a lovely way to pay homage to the first Ghostbusters; there’s even a bust of Harold Ramis outside Erin’s office.

Ghostbusters is a feminist movie, but it’s also just a darn good movie.

Reviews: See what Amazon customers are saying about Ghostbusters.

Thanks for reading! Get my free Guide to 75 Binge-Worthy TV Shows when you sign up for my newsletter.

Cosplay Rules Everyone Should Know