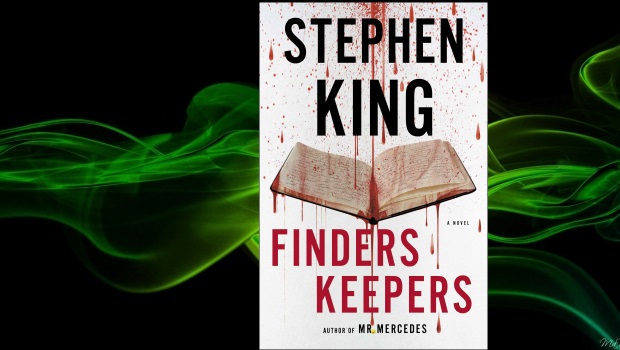 I have been trying to figure out what I like so much about Stephen King for over thirty years. Obviously, the guy spins some page-turners, but what makes them so readable? There’s a lot going on — believable characters in unbelievable situations, for instance, make the unbelievable situations a lot more believable — but ultimately I think it is the way King can get inside of a story and tell it in the most interesting way possible, selecting the right point-of-view character, moments of the story, interesting relationships. No matter what the subject matter, the story will be framed in a way to keep the reader moving along to find out what happens. For instance, Finders Keepers starts out by jumping between 1978 and 2009, between a complete scumbag and an earnest young man, between greed and generosity, and the inevitability of the collision of these events, even across thirty years, is compelling, even while the reader is very concerned about the safety and integrity of the young man, Peter Sauber. It should probably be noted that I don’t think that Stephen King necessarily thinks of this intellectually; it’s probably just how he writes.

I was worried when I first heard about Finders Keepers as a sequel to Mr. Mercedes. Mr. Mercedes was a fun, quick read, but I complained at the time that it seemed like a writing exercise for Stephen King to try a John Sanford-style procedural mystery, albeit a successful exercise. But Finders Keepers isn’t that. As a matter of fact, the two books seem more like they are part of the same world than a connected series. I wonder if an older, wiser King is avoiding writing monster novels like The Stand by establishing a connected series. Rose Madder, Gerald’s Game and Delores Clairborne, which are all connected by the idea of domestic violence, a few shared characters, and an eclipse.

Mr. Mercedes initiating action was a crazy guy running his car into the packed line at a job fair, killing a few and maiming many. One of the injured is Tom Sauber, an out-of-work real estate agent for whom the injury is the last straw in a series of bad luck. He is in pain, on prescription pain killers, and spiraling out of control into a failed marriage and misery. His children, Peter and Tina, see their parents fighting over and over again about money and are terrified. Remember I said that King creates believable, compelling situations? The domestic drama of their household not only rings true, but is an interesting study in how factors outside of a relationship — crazy guy running over you with his car, the economy tanking — can stress a marriage.

The plot of the book is that in 1978, Morris Belamy robs and kills a reclusive author, stealing a sizable chunk of cash and a bunch of unpublished manuscripts. Morris stashes the cash and books and is arrested for rape and sentenced to life the next day. In 2009, Peter Sauber finds the money, which he anonymously uses to subtly bump his family’s income, improving their lives drastically. And the manuscripts change his life, making his obsessed with literature — a common King trope these days and I have no issue with that!

Speaking of consequences, this is not the first time that King has written about the idea of fans being so angry with an author that they torture or kill them, significantly in Misery, which is a great, great book. And The Dark Half was about a writer being accused of plagiarism by a fan. So those stories are about the situation, whereas Finders Keepers is about what happens to the author’s reputation after he dies. Oddly, a lot of people think better of the author when they find out about the contents of his lost work.

For those of you who are admirers of things literary, the reclusive author in Finder’s Keepers, John Rothstein, is a fun combination of J.D. Salinger and John Updike who King has a ton of fun with, lampooning writers, professors, book collectors, critics, and fans with an understated zeal that is subtle enough not to jump out from the books as authorial opinions. But don’t worry, writers and the rest all get advocates as well, particularly English teachers, who are shown to really make a difference to kids when they try.

Another crossover with Mr. Mercedes is retired detective Bill Hodges, who I felt was a smidge underdeveloped in the previous book, continues to grow in this story. Along with his Scooby gang of misfits, the story builds to an interesting confluence of events. I’m interested to see where this Bill Hodges story line is going because it is by no means over. But I don’t want to spoil too much either and Bill comes into the book about halfway in.

I try not to conjecture on the biographical reasons for literary creation, but it is really difficult not to see the spectre of Stephen King’s being struck by a car while jogging. It’s not the guy running his car into people that makes me think that, it’s King’s spot-on understanding that “healing” isn’t something that just happens with time; it takes work, rehabilitation, and the enduring of constant pain and the effect all those things have on personal relationships. Sure, King has boxed all that around a heckuva a fun yarn, but — and I realize that this is going to sound stupid — we all benefit from King’s hard-won wisdom about the process of healing from a traumatic injury. To simplify this, how long is someone allowed to be a jerk because they are in pain before it’s all right to give up on helping them? What if it’s emotional pain? I recently complained about how shallow Clive Barker was, could I have been unfairly comparing him to the avuncular sage Stephen King?

Anyway, while Finders Keepers is by no means trying to be great literature, it’s a fun read from one of our best writers. Give it a go. And I don’t even think you have to have read Mr. Mercedes first either. Although, you might as well.