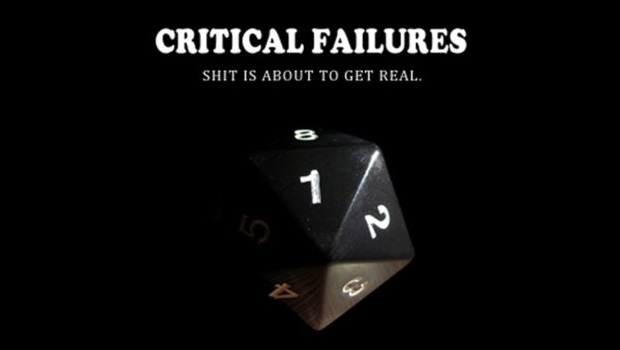 I picked this book up on a lark. Rarely have I been so entertained by something I knew nothing about when I purchased it.

Critical Failures (Caverns and Creatures) by Robert Bevan is a comedy-laced fantasy. It was definitely written for a specific audience (the tabletop role playing crowd), but I think even someone with only a passing knowledge of this type of game will find it amusing. Although some of it is obviously borrowed from Dungeons and Dragons, the author does a nice job of explaining things without talking down to the audience, and because most of the humor is between characters, you won’t need to “get” a lot of inside jokes to appreciate it.

It draws on the dream that appeals to many fantasy lovers: being able to actually live the fantasy, to step inside their favorite book or game and be a part of that world as a wizard or thief or warrior. Of course, just like so much in real life, getting your wish granted doesn’t mean it’s all that it’s cracked up to be.

In a nutshell, the cast of characters (a RPG tends to need a group so they can campaign together) offends their game master (the person in charge of helping the story unfold and basically acting as an omnipotent overseer), who magically transports them into their characters into the made-up world they’ve been pretending to be in. They have all the attributes and accessories their fake characters have, but their personalities and mindset are firmly mired in a modern time. Which means, of course, that just because you look like an orc doesn’t mean you are an orc; you’re still just a 20-something slacker who has to traverse a new universe and try to stay alive.

Although the plot is simplistic, the interaction between the characters and trying to deal with their new situation is downright hilarious. It was quite easy to hear the squabbling and uncertainty in my head, and to imagine that this is just how people would react if they were ever tossed into a scenario such as this.

A downside of the novel is that it does end with a cliffhanger—will they ever get back to real life?!—and leaves it feeling unfinished. The good thing, however, is that the author has a second short novel available and many short stories based in the same universe. They’re available in both paperback for the traditionalist and electronically, and a bonus for Amazon Prime members is the availability for free through the Kindle Owner’s Lending Library.

‘The Woodcutter’ by Kate Danley, Review