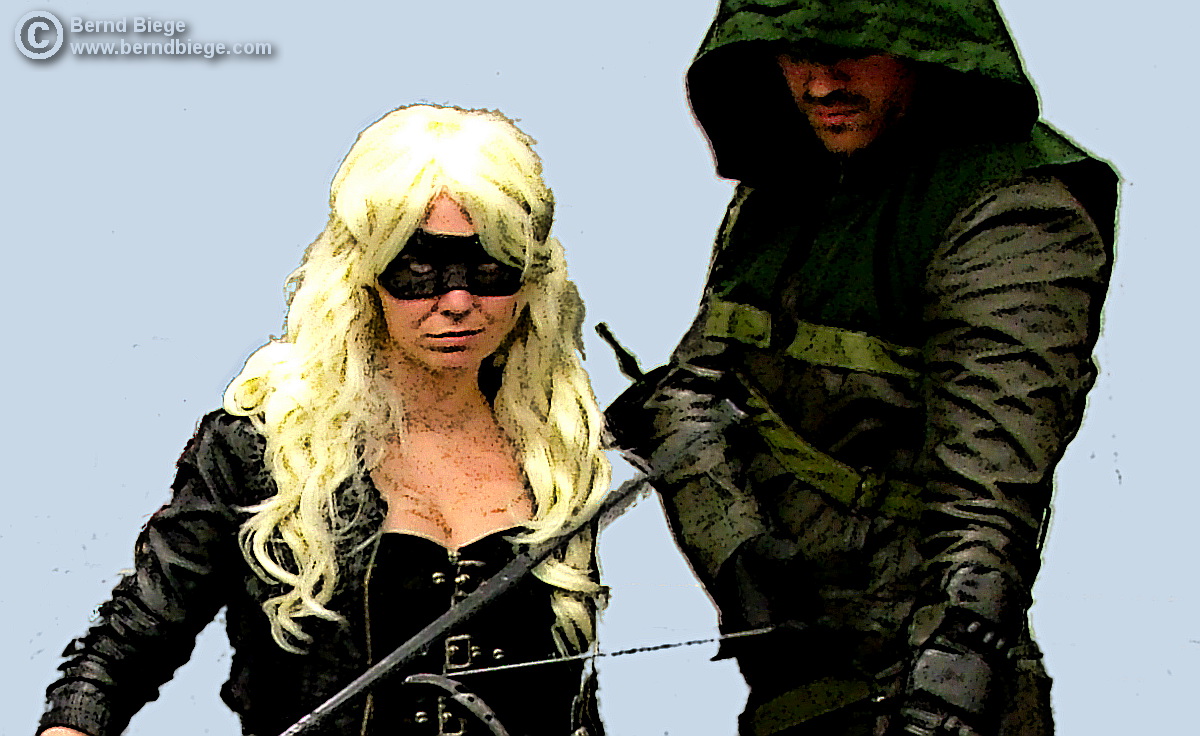 So, what is cosplay? Isn’t that just a bunch of kids trying to dress up like manga characters?

Yes, cosplay often has a very close affinity to Japanese pop culture, and that is indeed very much dominated by manga (Japanese graphic novels), anime (Japanese animated films), and video games (which often share aesthetics with the first two). And cosplay, as a word, often references this subculture.

But cosplay is more, it is actually an all-encompassing term, and should not be used in a derogatory way. Because, at the very core of things, cosplay is “playing in costume”, off a conventional stage. But then the bard already said that “all the world’s a stage”. So let us ask, what is cosplay, and identify related activities – the practitioners of which would often be horrified to be called cosplayers.

Dressing Up – and Growing Up?

Let’s face it … didn’t we all play at “dressing up” at one stage or another, more than likely in childhood? Chasing each other around as “cowboys and Indians”, or holding a tea party like a proper princess should do, or even raiding the adults’ wardrobe for a bit of fun? Of course, that was then, now we have grown up,and out of it.

Everybody raise their hands who ever tried to imitate a “look”. Thought so. And yes, even you, slightly sneering hipster in the back row, with your hands firmly in your skinny jeans’ pockets, you are doing it as well. As adults we still dress up. It is just our costumes that have become so much more boring – our work clothes, our trendy evening outfit, our funeral suit.

Obviously, a firefighter cannot do the job in a polyester clown costume, and work boots make eminent sense over sneakers if you drop a sledgehammer.

Dressing up just becomes serious business in adulthood. You not any longer feel free to live your dreams, but you feel (and even if you don’t feel it you still are) pressured into adhering to certain norms, dress codes. There is absolutely no reason why you cannot do your office job in sweatpants and an old t-shirt, and there is no correlation between stock prices and “Casual Friday”.

Actually, don’t you have some special clothes you just feel good in? Good as in “empowered”, or at least an improved version of your daily self? Clothes which you put on when you want to feel better, or when you want to achieve something?

You see, you never grow out of dressing up … and you might actually do a bit of cosplay here as well. As I said above, cosplay generally refers to donning a costume, and the play part refers to either actually playing a role, impersonating a character, or simply to having fun outside of work. So everything that follows below could actually be termed cosplay. But …

These days the term Cosplay will more than likely either reference or invoke images of folks imitating the looks of popular characters from mainly Japanese and US franchises. From immensely popular video games like The Legend of Zelda to the newest Marvel, DC, or indeed Disney offerings, from The Walking Dead to Black Butler. Though, all in all, costume creations based on Japanese ideas tend to make for the more outrageous, and unusual, visual effect.

So, yes, Cosplay with a big C, as a genre label, might well be identified with pop-culture heroes and villains being represented by ordinary people. Who dress up. And often “play” in character (mostly striking poses when another photographer comes along). But who might be of any age, with those below 30-something making up the bulk.

Talking about playing – Live Action Role Playing, or in short LARP, has developed from such games like Dungeons & Dragons (D&D), role-playing games (RPGs) that the players no longer wanted to act out with pen and paper, or with miniatures, only. So they turned to playing in costume. With many of the RPG rules still in place.

After all, you might be free to dress up as elves and orcs, but once you chop each other’s heads off, the police will get called. Hence all the chopping, indeed all the fighting, in LARP events is done without real weapons. Oh yes, they might wield big swords, but they are made of latex and styrofoam. And would actually break if you hit somebody with it. So the LARPers know when to stop their strike.

All in all, LARP is very much like Cosplay. With the same demographics. And a better tan, as many events are outdoors. And with more rules.

Now some LARPers may take offence here, and point out that they are not playing at superheroes or hyperactive hedgehogs. Indeed they are not, they just imitate the fantasy worlds of J.R.R. Tolkien, George R.R. Martin, or Terry Brooks. With a bit of Games Workshop thrown in. No need to feel superior about this, folks. MedRen – Come As You Are

Then there is the whole MedRen business, or in German the “Mittelalterszene” (literally “medieval scene”) – mostly adults (and often over the 30-something barrier), trying to dress up in typical medieval gear. And having fun at playing our their roles, though unlike LARPers they do not tend to actually fight.

Sponsor: Check out Plus Size Nerd’s blog post about choosing a plus size wench dress for cosplay or a costume >>

Which is a good thing, as MedRen folks often carry “real” weapons. Real as in made of steel, and really painful if you get hit with them. Thankfully most are blunt, mainly due to local law. And they are more than often of “display quality” only. Which means they’d be prone to shatter (and release parts flying at high velocity into the vicinity) when actually clashing. Have a wild guess why replica weapons fit for show fighting are much more expensive as a rule.

Now the main problem with the whole MedRen thing is … a time period of roughly 1200 years is being forced into one event. And does not gel. To be honest, most folks actually wear a few centuries of gear and style in their “Gewandung” (the German keyword for MedRen clothes). While the Society for Creative Anachronism seems to recognize this, and chooses to ignore it for fun’s sake (or, as a member told me, “if it looks roughly medieval from ten feet away in candlelight you’re okay”), other folk simply do not understand that they are looking like an extra from a 1950s movie, but nowhere near authentic.

Is that bad? Not, if you see your MedRen hobby as cosplay … but definitely if you want to be a reenactor.

Reenactors are much more serious about all this – they wouldn’t be seen dead in non-period gear, and try to get their costume (for that is what it is) historically right to the last button.

Very many do. Others look the job from a distance. A few are simply wrong. And that might have several reasons … Confederate soldiers during the last years of the War of the States were generally not as rotund as many a reenactor is, soldiers of all ages tended to be male and young (the History Channel has to answer for masses of Viking shield-maidens at recent reenactments), and many a hairstyle or beard is simply not up to scratch. And there is always that painful moment when the Roman legionnaire checks his watch.

Having said that, there are extremely good reenactors about, and they would have as original a kit as possible. Down to real, though not necessarily functioning, weapons. And all the gear made from original materials, often using traditional methods. They will also have a host of background knowledge on their chosen period and costume. These are the guys to go to. Even at the risk that they start to talk you ears off – most are only too happy to find somebody interested and willing to listen. At the end of the day, however, even the most authentic, die-hard reenactors, who even camp out in historic tents with just a woollen blanket, are cosplayers. They are playing a role, albeit a historic one, in costume.

After All, it Still is Dressing Up

Cosplay, LARP, MedRen, Reenactment – all these have a common ground. People like to dress up, and relive the era (or universe) their costumes are based on. Whether you are an away team from Star Trek, or a German Fallschirmjäger unit in 1943, or a group of Hobbit adventurers with hairy feet, or a medieval scribe asking for the new Mediaeval Baebes CD at the merchant’s wondrous stall. You are all just dressing up. There is no difference between you.

And more power to you for that, because as long as this stays fun, there is no harm in it at all.

But one thing … there is often an almost idiotic rivalry between the different factions that (should peacefully) coexist in the cosplay world. Mostly based on stereotypes, like Cosplayers being kids with a manga fixation, or at the other end reenactors being Neo-Nazis because they dress up as WW2 Germans. If everyone in a Joker costume was a homicidal maniac, the MCM Ireland Comic Con would have ended in a bloodbath …

And there is often also a sense of supremacy amongst some groups.

I have often seen reenactors sneering at LARPers, MedRen folk, and Cosplayers, citing their “historical research” and the amount of time and money that went into their “authentic uniform” (as opposed to “costume”). Well, that might be the case … but I know Cosplayers who spend longer on recreating (and often adapting, after all nobody has the body of Wonder Woman or Wolverine) the costume of their character, never mind the money, or often the necessity to build accessories from scratch.

Have fun, all of you.

The Cosplay Store Online That Will Surprise You