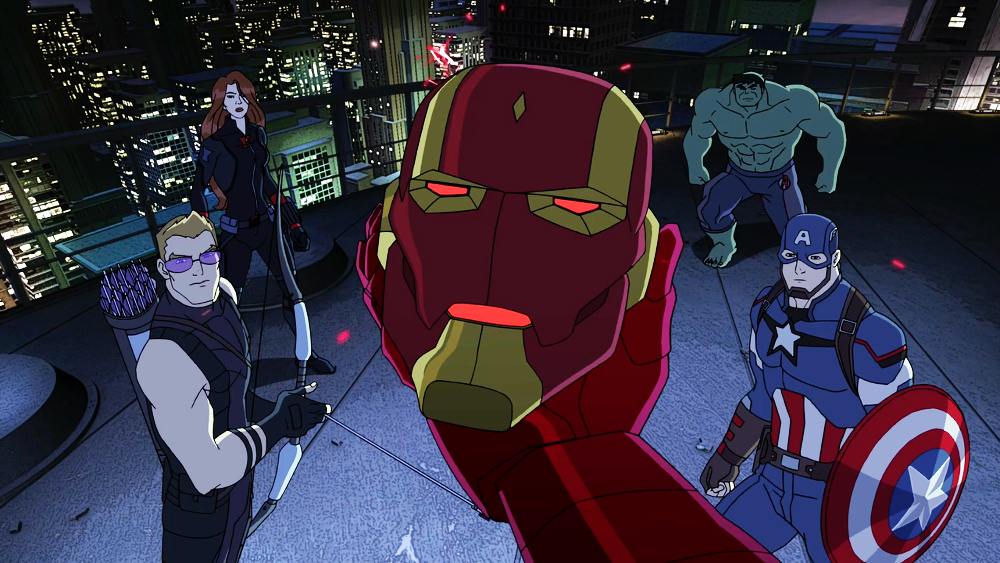 Marvel’s The Avengers: Earth’s Mightiest Heroes seems to stick to the stories in the comic books the most. Would you agree?

Definitely. That show was a walk through the Marvel universe, obviously created by people who love all things Marvel. No pandering! I love that Marvel cartoon for its love of the Avengers.

Marvel’s The Avengers: Earth’s Mightiest Heroes did a great job of having continuity, but was still able to have stand-alone stories. And there were consequences. People would get mad at each other, and still be angry in the next episode. I hate shows where there is a reset every week.

Apples and oranges. Modern cartoons have that smart, snarky sense of humor that Disney brought to the table in the ’90s with movies like Aladdin. The cartoons from the ’70s and ’80s are that weird combination of deadly serious and campy, that children’s programming had, that make them un-watchable. You’d have to show them to a kid to see if they’d like them, but I can’t really watch them. It’s like the difference between the Warner Bros. cartoons from the ’40s and ’50s, which are smart and still funny with beautiful animation, and the Hannah Barbera cartoons from the ’60s, which are still good, but were made on a tight budget and do not reference what’s going on in the culture at the time. I think kids today live in a golden age with shows, like SpongeBob SquarePants, that are a pleasant surprise when your niece ropes you into watching it, and then it’s actually pretty funny. There have also been several Spider-Man cartoons over the years. Do you have a favorite? What do you think of Ultimate Spider-Man on Disney XD?

I don’t like Ultimate Spider-Man. They did that thing where they brought in three amazing buddies for Spider-Man that have never really been developed. I think that the show is for younger kids. I’m not really their target audience. Whereas, I loved Spectacular Spider-Man and didn’t miss an episode.

The best cartoons are always ones that take the source material seriously and don’t pander to kids. The expression “toyetic,” meaning that the cartoon has a way of making children covet related toys, gets thrown around a lot as the biggest drawback to cartoons. But that has never really bothered me. Of course, kids are going to want, for instance, a Batmobile. Batmobiles are cool! (I kind of want a Batmobile.) The worst cartoons are the ones that simply don’t get the source material. And don’t respect it.

There was a golden age a few years ago when The Spectacular Spider-Man and Marvel’s The Avengers: Earth’s Mightiest Heroes were on at the same time. It seemed like we were just watching the Marvel comic book universe come to life onscreen, so I’m going to say those two were the best Avengers cartoons. They not only respected the source material, but also understood the opportunities that the episodic nature of story telling allow, like the slow reveal of Black Widow as a double double agent or the “What the heck happened to the Hulk?” storyline.

The worst? I don’t like to cast aspersions, but anything Marvel did in the ’90s. Or Avengers: United They Stand. Oh, wait, that’s definitely the worst of the Avengers cartoons.

The Marvel’s Avengers Assemble cartoon echoes the current movie stories. For instance, Disney XD aired a five-part Ultron story arc. What do you think are the pros and cons of that?

I’m speaking as an adult, here. Those stories on Marvel’s Avengers Assemble seem to pander to the kids, rather than speak to them. Whenever I watch them, I have the feeling that some corporate overlord came up with the idea. The biggest con for me is that it seems like there is a cut-rate Rich Little on the show doing a bad Robert Downey, Jr. impression. Downey is really difficult to imitate because of the strange energy he brings to the performance. So it’s really distracting to me as an adult to hear that. And I get it, they want the characters onscreen to match the characters in the movies so that the kids get what they want.

But the cinematic universe, no matter how good a job they have done of bringing it together, avoids episodic story lines, except in the broadest sense (Thanos is a guy who exists, who wants the infinity stones). There’s a feeling– I always had this with the Star Wars comic when I was a kid too– that nothing really exciting can happen on the Avengers cartoons since everyone has to be back at home plate when the next movie comes out. It’s not like Hawkeye is going to die on an Avengers cartoon.

The problem is that the storyline of the cartoon is subordinate to a storyline being created by an entirely different set of people who can prevent your cartoon from airing, if they don’t like what you’re up to.

What about the Hulk cartoons? How would you compare those? For instance, Hulk and the Agents of S.M.A.S.H.?

Hulk and the Agents of S.M.A.S.H. reminds me of The Simpsons episode, “The Itchy and Scratchy and Poochie Show,” when they brought in the new, funny guy, Roy, who likes to “hang ten” and calls Marge “Mrs. S.” Except on Hulk and the Agents of S.M.A.S.H., everyone is like that. The characterization of the Hulk is sort of interesting and the voice cast is amazing. But again, it’s for younger kids and I don’t watch it. I swear, they say “Hang Ten!” on that show.

What do you think of the Avengers cartoons that are stand-alone features, like Iron Man and Captain America: Heroes United?

Thanks for reading! Which Avengers cartoon is your favorite?