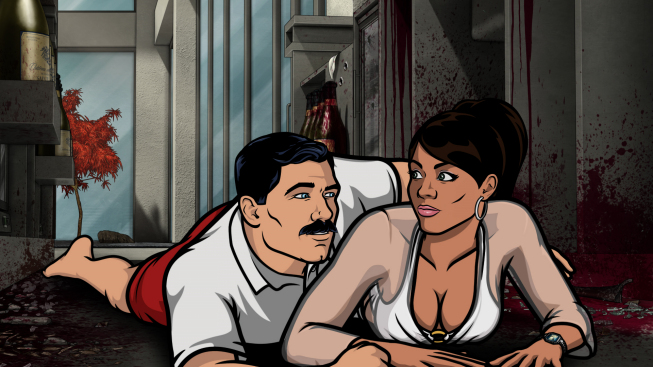 Archer is an animated comedy on F/X that spoofs the spy genre. With decidedly adult dialogue and storylines, Archer combines the look of Johnny Quest with the humor of a sketch comedy. Our Archer review covers the characters and creators, as well as the cast’s performance.

The characters of Archer make the cartoon worth watching. Each Archer character is dysfunctional in his or her own way. They’re full of flaws and bitterness. (The bitterness is the best part, because they insult each other with abandon.)

Sterling Archer is the lead agent of ISIS, possibly because his mother, Malory Archer, is the head of the agency.

Agent Lana Kane is Sterling’s ex-girlfriend. She dated Cyril Figgis, another agent, who’s more accountant than daring spy. Now, however, she’s raising a daughter she had with Archer.

Cheryl Tunt is a billionaire heiress, who loves to drink and get kinky. She lived out her dream of being a country singer.

Pam Poovey, a fan favorite, is always looking to get laid. She got hooked on cocaine for a brief time, during which she lost a ton of weight.

Dr. Krieger is their mad scientist. He has a holographic anime girlfriend.

Ray Gillette is another spy on their team. He used to be a parapalegic, but Dr. Krieger helped him walk again.

Archer boasts a talented cast with veterans of stage, screen and stand-up comedy.

Judy Greer (Love and Other Drugs, 27 Dresses) as Cheryl

Archer is the best animated comedy I’ve seen in years. The comedy is so well-timed and clever. The cast gives hilarious performances, with almost deadpan delivery. The quick staccato dialogue is witty and hilarious. You will be rewinding your DVR asking, “Did he just say what I think he said?” Archer is not to be missed, especially by animated TV fans looking for more intellectual comedy than simple swear words and nudie jokes can provide.