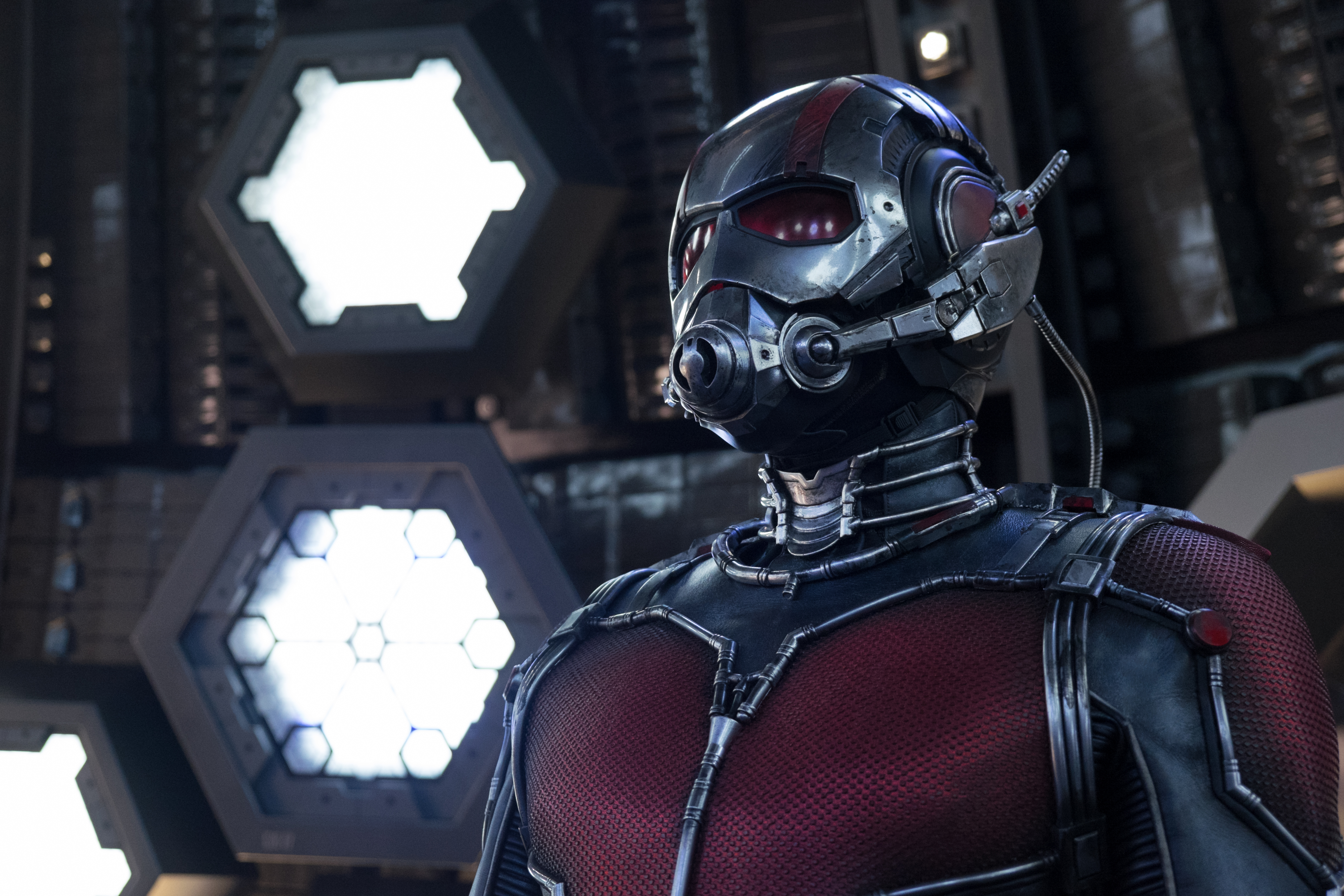 ‘Ant-Man’ Review: Is this little guy worth all the trouble?

When an Ant-Man film was announced as part of Marvel’s Phase 2 plan, a lot of civilians (people who don’t read comic books) scoffed at a movie about a shrinking superhero. Our Ant-Man review takes those folks to task. Every time I was in a 20-foot radius of such a scoff, I was quick to point out that, back in 2008, everyone wondered why Marvel was making a movie about Iron Man. [Cue cash register sound effect.] Ant-Man is an Avenger, and because Marvel movies center on the Avengers ‘verse, an Ant-Man movie is a logical choice for a stand-alone picture.

You cannot, however, go into Ant-Man with Avengers: Age of Ultron-sized expectations. The Iron Man, Thor and Captain America movies have a different tone than the Avengers films, and so does Ant-Man. Some fans find the change in pace too slow, while others enjoy the thorough origin story. (As an aside, I think Captain America: The First Avenger was a fantastic film, but others don’t agree.) While Ant-Man isn’t my favorite Marvel movie, it’s solid, entertaining and could easily springboard Ant-Man into his own series of films. The difficulty with Ant-Man is making his power seem impressive and finding a situation that’s perilous enough to raise the stakes high enough to make his contribution important. It’s not like watching the Avengers travel the world where we see crowd after crowd of people running for their lives. Those types of scenes, that keep global danger in front of our eyeballs, easily remind us of what’s at stake if they fail. But watching events unfold at Pym Tech and Scott’s ex-wife’s house makes it hard to remember that Darren (Yellow Jacket), the bad guy, is working with Hydra, who want to take over the world. The result is that we’re not as afraid for the world when we watch Ant-Man, even though they really are saving it.

The very nature of Ant-Man’s abilities makes it easy to write him off as a superhero. He can shrink, so what? The movie does a terrific job of addressing this issue. We see Ant-Man’s strength, his speed, his endurance and his ability to command an army. Yes, it’s an army of ants, but still! The only time I had difficulty rooting for Ant-Man was in a few wide shots where we saw a bunch of ants scurrying toward some goal. They shots are quick, thankfully, but it still gave me the feeling I was watching something silly.

Which leads me to another way Ant-Man addresses the silliness of watching a tiny man take out a bunch of bad guys. Ant-Man didn’t hide from the absurdity of a bitty superhero; it ran with it. The height of its tongue-in-cheek humor was my son’s favorite scene, when a giant Thomas the Tank Engine exploded from the second story of the house, swiveling eyes and all. Marvel was saying, “Look, we get it. He’s tiny. Come along for the ride, anyway.” (The creepy rabbit toy was a nice touch.)

Ant-Man also explored very serious themes, like sacrificing for the greater good, protecting the people we love, earning trust and respect, and learning to let go of bitterness in order to forgive someone. Speaking of seriousness, my main criticism of Ant-Man is that the incredibly talented Paul Rudd is required to play it straight. He’s the hero, so although he gets to be funny occasionally, the majority of his time is spent on the straight and narrow. Paul Rudd is so, so funny that the entire time I was watching Ant-Man, I kept hearing Tony Stark tell Dr. Banner in Avengers, “You’re tiptoeing, big man. You need to strut.” Having Paul Rudd as the straight man is like never letting Bruce Banner go Code Green. I wanted him to let loose, but he couldn’t. Most of the laughs went to Michael Peña, who plays his best friend, Luis. Peña was fantastic, but it nagged me to watch someone other than Paul Rudd play the crazy best friend. Don’t misunderstand me; Paul Rudd is wonderful as Scott Lang because, above all, he’s a great actor. I’m just too used to seeing him in all-out comedy mode.

Enough critiquing. On to the nerd factor! I spent a lot of time geeking out during Ant-Man. Here are all the ways Ant-Man made this fangirl go, “Squee!”

#1 Should Auld Acquaintance Be Forgot

The opening scene included silver fox John Slattery (Mad Men) as Howard Stark and (yes!) Hayley Atwell as Peggy Carter. Hayley Atwell is getting more mileage out of her Marvel character than I could have ever anticipated. Every time I see her, whether it’s a still photo in Avengers or Captain America: The Winter Soldier, or in person, like in Avengers: Age of Ultron and Ant-Man, I get jazzed to see the next season of Marvel’s Agent Carter. Where’s her black bodysuit?

#2 Black Widow Ain’t the Only Chick Who Can Sting Yay! I gave a big squee during the mid-credits scene when Hank FINALLY gives Hope her Wasp suit. When images and posters of Evangeline Lilly in Ant-Man were first released, I knew there was a reason she was sporting that severe-as-a-Hydra-agent haircut. I had to wait until halfway through the credits for the payoff, but it was worth it.

What a delight it was to see Falcon, played by Anthony Mackie, in Ant-Man. Watching Falcon and Ant-Man go toe-to-wing was a lot of fun. Plus, it was a clever way to draw Ant-Man into the world of the Avengers. C’mon, you know perked up when you saw that big A on the roof of the compound! Which leads me to…

If you weren’t fan enough to stay until the end of the credits, you missed some good eye candy — I mean, hints at what’s to come. Captain America and Falcon were seemingly babysitting Winter Soldier in a rundown mechanic’s garage. They mentioned whether or not to contact Stark, so I’m guessing Winter Soldier needs some help with his arm. Then Falcon tells Cap’, “I know a guy.” Well, Ant-Man already proved he can go sub-atomic, so maybe he’s up for some mechanical repairs? Judy Greer is everywhere this summer (Jurassic World)! Seeing her as Scott’s ex-wife feels like seeing your favorite doctor: you know everything’s gonna be all right.

I squee every time I see Christophe Beck in the credits of a big movie. Years ago, I would scour fan conventions for bootlegs of Buffy the Vampire soundtracks, which were composed by Christophe Beck. I’ve never met him, and he has no idea who I am, but I feel a fangirl’s sense of pride and ownership every time I find out he was the composer on a film, like Frozen, Edge of Tomorrow or Pitch Perfect.

#7 Who Lives in a Pineapple?

I didn’t notice, but my son did. Tom Kenny, who voices some of the most popular cartoon characters ever — like SpongeBob SquarePants, the Mayor on Powerpuff Girls and Ice King on Adventure Time — provided the voice of the ugly stuffed animal Scott gives his daughter for her birthday. In the credits, his character is simply listed as “Hideous Rabbit.”