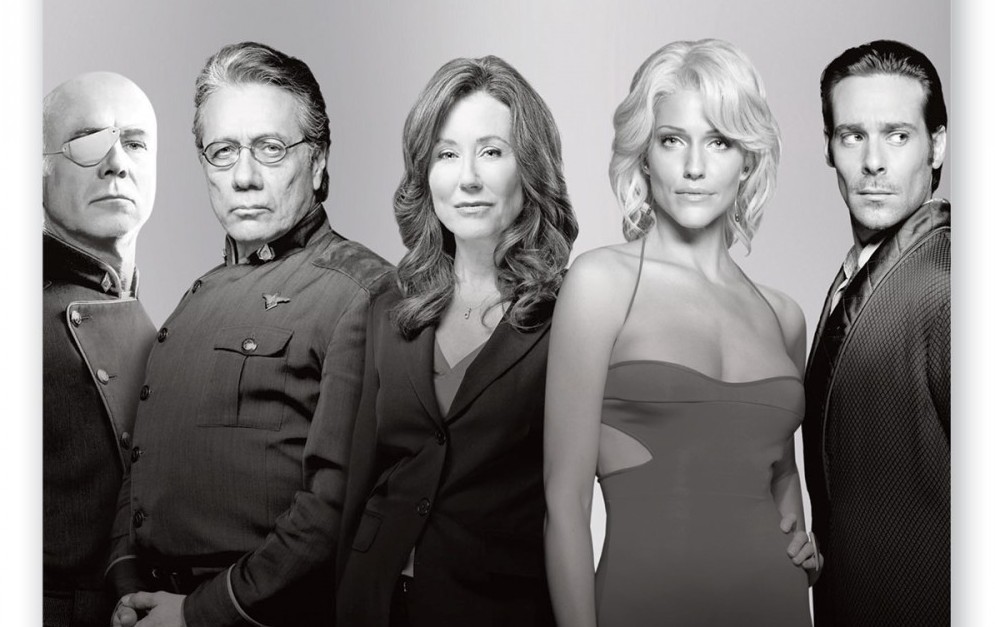 It’s hard to believe it’s been 6 years since the series finale of the re-imagined Battlestar Galatica faded to black, but I have been thinking about that series lately and how it was just the right show for its time.  The mini-series aired in December 2003 and season 1 began in the fall of 2004.  We viewers went through a lot of mid-season cliffhangers and some long waits, and the series came to an end in March 2009.

While the crew of the Galatica charted a course into the unknown, in many ways the series was a comment on our experiences here on Earth during those years.  It had a quintessential post-9/11 outlook with its apocalyptic opening, bleak circumstances, fear and suspicion, and confusion.  Heroes and heroic moments were hard to come by, and the enemy was not only among us, it often was us.  But that’s the subject of another article.  Ultimately, the show was about how those who remained alive had to rediscover their principles and values and even their humanity.  We might summarize the show in the words of Commander William Adama:  “It’s not enough just to live.  You have to have something to live for.”

Over its 4 seasons—or perhaps its 4.2 seasons depending on how you’re counting—BSG broke the rules of TV sci-fi again and again.  In this list, I’ve tried to pick 5 moments that signaled this was not going to be a ride-along with the all-star good guys of outer space.  This show was going to be something very different.  Obviously, spoilers abound in this list.

1. Not Boomer! The two-part mini-series had many jaw-dropping moments from the very first scene when Number Six kisses the guy who showed up for the annual negotiations with the Cylons to the very end of part two, which I definitely did not see coming.  As the various Cylons arrive at Ragnar, we see copies of all the models we’ve been introduced to up to this point, and when Sharon “Boomer” Valerii steps onto screen, I could not believe it.  Part of the credit for this wonderful moment must go to Grace Park, who played Boomer with so much charm, but it also signaled that even the most lovable characters might represent a danger from within.

2. Helo’s Still Alive! In the mini-series, with limited seating on the raptor, Helo chooses to let the esteemed scientist Gaius Baltar take his place, leaving Helo to face certain death on planet Caprica. I don’t know about everyone else, but I assumed that was the end of Helo until we returned to Caprica in the first episode of Season 1 titled “33.”  Helo is running through a radiation and Cylon-filled nightmare.  This was another surprise, partly because it opened up an entirely new set of stories in a place far removed from the adventures of the protagonists who—I thought—were all on the ship heading away from Caprica at light speed.

3. Admiral Cain? Midway through the second season, the Galatica meets up with a long lost sister ship, the Pegasus. When the commanding officer of the Pegasus meets with Commander Adama and President Roslin, the meeting ends with Adama saluting Admiral Cain, and we realize that she is his boss and the fleet is in for some harsh military discipline. This signaled that just when we get comfortable with the rules of this universe, the writers were still able to pull the carpet out from under us and change the game.  My only regret was that this storyline did not continue for a lot longer so we could have watched everybody get uncomfortable and wriggle under the iron heel of Admiral Cain.

4. One Year Later!! At the end of Season 2, Gaius Baltar surprisingly wins an election to become president of the Twelve Colonies, and his first order is to colonize the habitable planet they title “New Caprica.” When the words “One Year Later” appeared on screen, many millions of BSG fans shook their fists in anger, but I loved it.  This was another great you-think-you-know-where-this-show-is-going-but-you’re-wrong moments!  I thought this show was about a space ship, but now they’ve all decided to settle on a planet.  Worse yet, the season ended with President Baltar surrendering to the Cylons!  What?  An excruciating off-season followed as we all wondered where the show would go next.

5. Saul Just Killed His Wife! Colonel Saul Tigh bears the brunt of the Cylon occupation of New Caprica. He’s been tortured, lost an eye, and his wife has been sleeping with his tormentors to secure his release.  Worse yet, Ellen has given the Cylons information about the Resistance that her husband leads in hopes of saving Saul’s life.  Though she has done everything imaginable for her husband, it is he that must execute her for her crimes.  Actor Michael Hogan puts in an absolutely heartbreaking performance, the kind that elevated BSG from Saturday matinee material to truly groundbreaking drama.  Once again, viewers were left to wonder where the show would go next.

Admittedly, the show did not end up exactly where I wanted it to, but what a journey and what a turn for television to take.  At a time when reality TV shows like The Bachelor—with their small budgets and huge ratings—were threatening to make dramatic television obsolete, BSG reminded us that marvelous acting, great dialogue, and incredible plot twists could keep us on the edge of our seats in a way that reality shows simply could not.