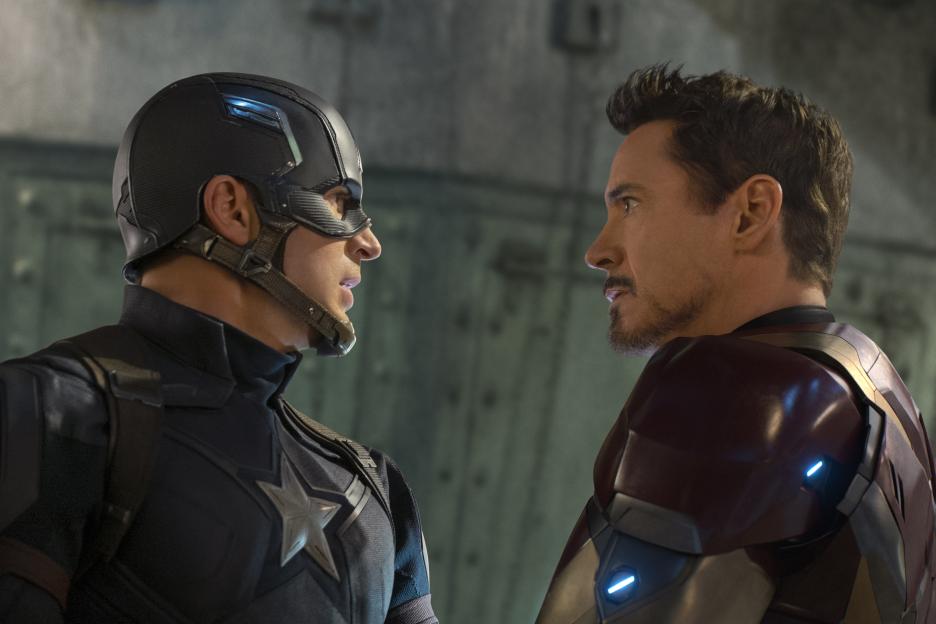 There aren’t a lot of “funniest” Captain America: Civil War scenes. Our favorite Marvel superheroes are pretty serious, this time around. They’re asking knotty questions, and few of them have answers. Like, is it okay to work outside the law if it’s the right thing to do? How far should you go for a friend? How do you decide how much collateral damage is acceptable?

Disclaimer: This blog post has affiliate links. Media Medusa makes a small commission when you purchase through those links.

Most of the funniest Captain America: Civil War scenes are given to the actors who have provided plenty of comedy relief in the past, namely Anthony Mackie, as Falcon, and Paul Rudd, as Ant-Man. Jeremy Renner’s dry wit comes into play a few times, as well. Just before initial fire fight between Crossbones (Brock Rumlow) and a small team of Avengers, Black Widow (Natasha Romanoff) tells Scarlet Witch (Wanda Maximoff) that looking over her shoulder needs to become second nature. Falcon (Sam Wilson) asks Black Widow if she’s paranoid. She responds, something like, “No. Why? What have you heard?” Clever! She ain’t just another pretty face. It’s the first line that gets a big laugh from the audience.

After the Lagos disaster, Wanda is in her room, watching news reports that blame her. As Cap’ is trying to console her, Vision floats through the wall, startling everyone. Wanda chastises him, and he is appropriately abashed, saying he thought it was okay because her door was open. At the end of the scene, he politely exits through the door. Bad Vision! After capturing him, Captain America (Steve Rogers) and Falcon hold Winter Soldier in an unknown location. Bucky wakes up, and Steve asks him if he knows who he is. Bucky replies, “You’re Steve. You used to wear newspapers in your shoes.” Bucky and Steve share a chuckle, and Sam asks, “Just like that? We’re cool?” In that brief sentence, Sam gets to the crux of the whole movie: Winter Soldier has done a slew of horrible things, and just because he’s Captain America’s old chum, he gets a pass? Sam’s version, however, makes it one of the funniest Captain America: Civil War scenes. One of the funniest Captain America: Civil War scenes is more of a moment, the blink-and-you’ll-miss-it kind. The scene opens on Vision, in his woolly pullover, standing at the stove, reading a recipe aloud, “A pinch of paprika…?” The juxtaposition of an alien superhero in a mundane kitchen scenario is just hilarious. Both times I saw Captain America: Civil War, the audience laughed.

There are actually more than one funny moments in the scene that takes place in and around Steve’s “borrowed” VW Bug. First off, Sharon chides him with something like “I don’t think you understand the concept of a get-away car” when she spies his run-down Volkswagen. Next, Bucky, who’s sitting in the backseat, asks Sam if he can move up? After a beat, Sam replies, “No.” The camera switches back to Steve and Sharon for a bit. When we see inside the car again, Bucky slowly shifts to the other side of the car; both men are still grumpy. Back to Steve and Sharon for a long overdue kiss. Now, when the camera takes in the car, Sam and Bucky are wearing lopsided grins and nodding their approval at Steve. Start to finish, one of the funniest Captain America: Civil War scenes. Bromance, all around. Ant-Man (Scott Lang) is recruited to join Team Cap’. When Scott meets the team, he’s nearly besotted with Captain America, going so far as to measure the breadth of his shoulders with his hands. He spies Scarlet Witch behind him, and throws her a casual, “I know you. You’re great too.” When it comes to superheroes, only Spider-Man (Peter Parker) can give Iron Man (Tony Stark) a run for his money when it comes to diarrhea of the mouth. Spider-Man’s gregarious nature gets so annoying that, during the big fight, Falcon says, something like, “Kid, I don’t know if you’ve ever been in a fight before, but there’s not usually this much talking.” Burn!

That same part of the fight comes to an end when Falcon uses his remote-controlled jet to take Spider-Man away. While he and Winter Soldier are lying on the floor, Winter Soldier asks something like, “You couldn’t have done that earlier?” Falcon replies simply, “I hate you.”

During the big fight at the airport, Ant-Man tells his team he’s got a trick up his sleeve. It’s one of the best moments — and best-kept secrets — of the movie. He hits a button and grows to an enormous size. As he swats Iron Man and War Machine (James Rhodes) from the sky, Iron Man says, something like, “Does anyone on our side have a shocking and impressive talent or skill they’d like to share?” Poor Team Tony. While Team Iron Man is fighting giant Ant-Man, Spider-Man gets an idea. He asks, something like, “Remember that really old movie? Empire Strikes Back?” Ouch. Then War Machine and Iron Man bicker about the kid’s age, before taking down Ant-Man, AT-AT style.

When Tony Stark leaves the Raft (the prison) the first time, off to help Cap’ secretly, he tells the Secretary of State that if he calls, Tony will gladly put him on hold, just to watch the blinking light. Near the end of the movie, that joke gets a callback in one of the funniest Captain America: Civil War scenes. Secretary Ross calls Tony, and Tony proceeds to put him on hold, just as Ross is saying, “Now wait just a minute!”

Thanks for reading! Which scene is your favorite? Let me know in the comments!