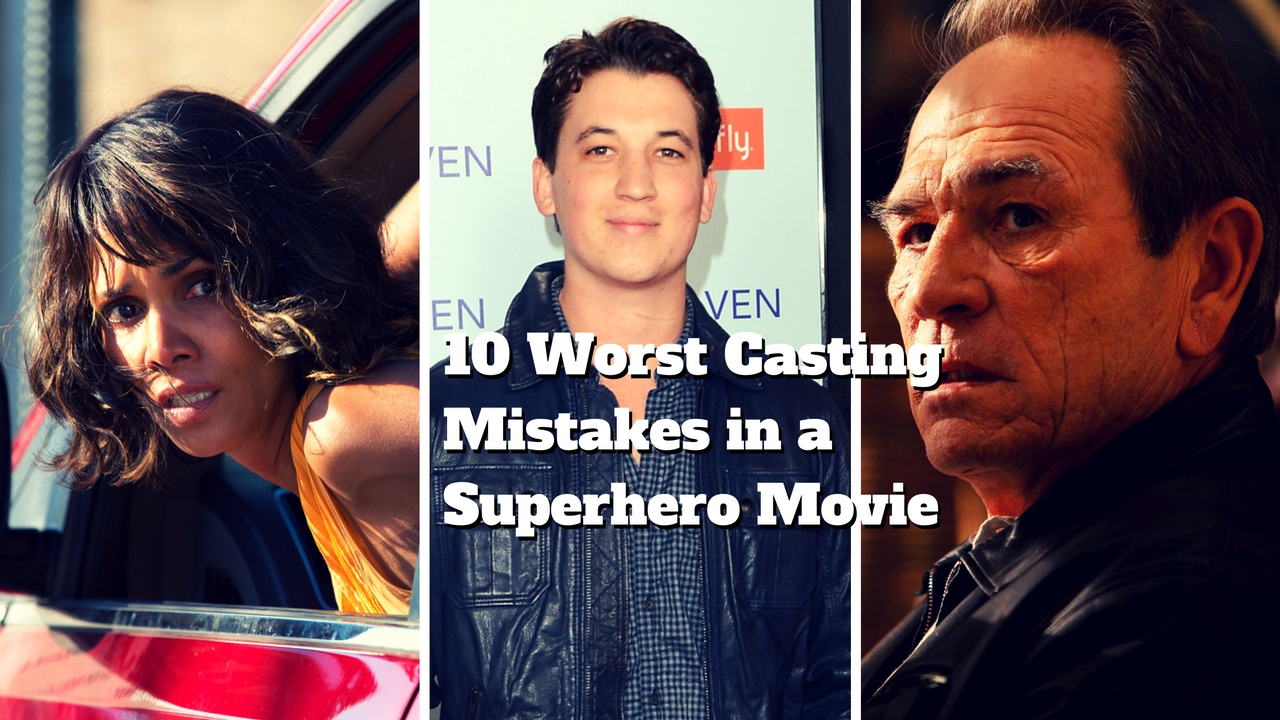 Some of the worst casting mistakes in a superhero movie have been very obvious, while others sneak up on you. Maybe you’ve enjoyed a superhero movie, only to realize later, as you drift off to sleep, that one of the actors just sucked.

Here are ten of the worst casting mistakes in a superhero movie, including one actress that is still making superhero movies. See if you can guess which one!

Halle Berry has had a long and successful career as a critically-acclaimed actress. However, Berry’s turn as Storm in the X-Men movies hasn’t won her any praise from critics or fans.

Halle Berry’s terrible run as Storm, the mutant with weather-controlling powers, began with X-Men in 2000. Berry may have looked the part of Storm, but her overly-serious line delivery made her stand out as dull and nearly robotic. Her performance came off especially lackluster alongside Hugh Jackman, who played Wolverine with a natural, cavalier attitude.

The pinnacle of her horrible performance was a line delivery during the final battle in the Statue of Liberty. The worst line in the movie was originally attributed to one of the writers, Joss Whedon, who is now Hollywood’s golden boy thanks to his outstanding writing and directing for Avengers and Avengers: Age of Ultron. But Whedon told AV Club in an interview that it was Berry’s melodramatic delivery that ruined the scene. Berry was supposed to say ,”You know what happens when a toad gets hit by lightning? The same thing that happens to everything else,” offhandedly, making it sarcastic and funny. Whedon said, “But Halle Berry said it like she was Desdemona.”

Halle Berry earned a second entry on this list after turning in a failed feline performance in Catwoman in 2004 The formula for a successful stand-alone movie about Catwoman seemed infallible. Take popular comic book character, add a gorgeous Oscar-winning actress, mix in the latest (at the time) visual effects, and the inevitable result would be a hit movie. Although Catwoman bombed for more than one reason, casting Halle Berry as the titular character proved to be the mistake everyone remembers.

As Patience Phillips, the woman who would become Catwoman, Halle Berry was less than convincing as a clumsy, timid, messy graphic artist. She seemed uncomfortable in her role, pretending to play a part, rather than actually playing it.

As Catwoman, Berry cranked up the slink factor a little too high, coming off more like a member of the Pussycat Dolls than a superhero. She lacked the tortured soul that lay beneath Catwoman’s snappy dialogue, as well as the instinct for self-preservation that Michelle Pfeiffer and Anne Hathaway were able to portray so well in the same role.

The Dark Knight is arguably the best movie in Chris Nolan’s Batman trilogy. But casting Maggie Gyllenhaal as Rachel Dawes, the object of Bruce Wayne’s unrequited love, was a misstep.

In the first installment, Batman Begins, Katie Holmes played Bruce Wayne’s would-be girlfriend. She combined her innate allure with an intelligence and strength that’s very attractive. She seems like Bruce’s equal, and you can almost feel the friendship that goes back to their childhoods.

However, Holmes was unavailable to play Rachel for The Dark Knight, having chosen to star in Mad Money instead. (I know, right?) Nolan cast Maggie Gyllenhaal as a replacement. While Gyllenhaal had been nominated for two Golden Globe awards for Best Actress by the time she filmed The Dark Knight, her performance just seemed off. She accurately portrayed a smart assistant district attorney, but her banter with Bruce played more like a sibling rivalry than a lovers’ quarrel. Gyllenhaal had little chemistry with Christian Bale as Batman. No wonder he chose to save Harvey Dent instead.

You may not remember who Ray Park is, which is exactly why casting him as Toad in X-Men was a terrible idea. Ray Park played Darth Maul in Star Wars: The Phantom Menace just before playing Toad, the mutant with an amazing tongue, in X-Men. Director Bryan Singer, no doubt, cast him because of his notoriety, rather than his little talent.

Prior to Star Wars: The Phantom Menace, Park had been a stunt man. His physical prowess and combat ability made him look like a wonderful Darth Maul. However, his high-pitched voice wasn’t suited to the character, so George Lucas hired Peter Serafinowicz (The Tick) to dub his lines.

Park’s performance as Toad in X-Men is a mix of mugging for the camera and odd choreography. In an appallingly cheesy nod to his role as Darth Maul, he even swings a pole like a double-sided lightsaber during the final battle. Evan Jonigkeit played a much more grounded version of Toad in X-Men: Days of Future Past.”

Miles Teller has earned praise as an up-and-coming star for his roles in The Spectacular Now and Whiplash. But when it came to playing superhero Reed Richards, a.k.a. Mr. Fantastic, in Fantastic Four, Teller was lost.

Miles Teller wasn’t the only one bombing in Fantastic Four. He shared the 2016 Razzie Award for Worst Screen Combo with Michael B. Jordan, Kate Mara and Jamie Bell, his fellow cast members. Teller, however, was especially unsuited for his role. He didn’t make any clear character choices, so his performance was flat and very bland. His baby-soft skin and perpetually lost expression didn’t convey the sense of intelligent leadership the Fantastic Four needed. Plus, he was never convincing as a nerdy scientist. He seemed to lack the imagination a superhero movie requires, because so much filming is done with green screen backgrounds and dummy placeholders for CGI characters.

By the time Nicolas Cage starred in Ghost Rider in 2007, he was well into the phase of his career when he was just looking for a big paycheck. After winning a Best Actor Oscar in 1996 for his role in Leaving Las Vegas, and being nominated in 2003 for Adaptation, Cage set his sights on big bucks, rather than critical acclaim. Casting him as Johnny Blaze in Ghost Rider, therefore, guaranteed that the superhero movie about a man who gives up his very soul to become a vigilante would walk a thin line between campy humor and bad puns. Nicolas Cage is fantastic at campy humor, as evidenced in his Raising Arizona performance. But Ghost Rider needed to be more than just funny; it also needed to be a high stakes, life-or-death drama. Nicolas Cage just didn’t have the gravitas to pull that off.

Tommy Lee Jones is an esteemed actor who has made playing tough-as-nails characters his stock in trade. He starred in such dramas as No Country for Old Men, In the Valley of Elah and Lincoln. So, it’s difficult to imagine Tommy Lee Jones dressed in a suit that’s half Men In Black and half psychedelic zebra. As Harvey Dent, a.k.a. Two-Face, in Batman Forever, half of his face resembled one of the California raisins in a Cyndi Lauper wig.

Granted, the entire debacle of Batman Forever, starring Val Kilmer as Batman, was full of misfires in one of Joel Schumacher’s attempts to revive the Batman franchise. But casting an actor who is synonymous with five-star generals and street-hardened cops was a mistake. Seeing him prance around in the wake of Jim Carrey, as the Riddler, looked like Jones was fleshing out a sketch for Saturday Night Live.

Most fans and critics agree that Mark Ruffalo is nearly perfect as the Hulk in the current Marvel Cinematic Universe. Ruffalo, however, stepped into the role after Edward Norton stepped out. Casting Edward Norton in the role of Bruce Banner for 2008’s The Incredible Hulk turned out to be one of Marvel’s worst decisions in recent years, because of the turmoil between the leading man and the studio.

While 2003’s Hulk, starring Eric Bana, isn’t considered canon, The Incredible Hulk is. Marvel courted Edward Norton, who has show a talent for playing a diverse set of characters, for the role. Before The Incredible Hulk was even released, however, rumors began swirling about a dust-up between Marvel and Norton. By the time The Avengers was in pre-production, and Ruffalo was cast as Bruce Banner, a lot had been written about what might have happened between the two.

Whether both parties disagreed about the final cut of The Incredible Hulk, creative choices that were made, or simply Norton’s possible salary for returning to the role, only the insiders will know for sure.In 2008, director Louis Leterrier told Collider that Norton had written a lot of material to add to the movie. Even though his scenes were filmed, they didn’t make the final cut, and Norton was furious. In 2014, Norton told Entertainment Weekly that he didn’t want to be pigeonholed into playing one kind of character, so he moved on.

George Clooney is dapper, stylish, witty and charming. Bruce Wayne might be described the same way, except for the fact that he his filled with pain and rage. Casting sunny George Clooney as Batman in Batman & Robin did almost as much damage to the franchise as the Batusi did in the ’60s. Admittedly, Clooney’s lines were goofy, like when he complains to Robin, “This is why Superman works alone.” But all of Clooney’s line deliveries make Batman seem merely grumpy, not tortured or mournful. His performance was flat, never reaching maximum broodiness or full-on camp.

Since 1997, when Batman & Robin was released, Clooney has made no bones about what a disaster the movie was. In 2014, during Disney’s Tomorrowland panel at the San Diego Comic-Con, Clooney even apologized for ruining Batman, and for the nipples on Batman’s suit.

In a true bid against type-casting, director Zack Snyder chose the extremely talented Amy Adams to play Lois Lane in the current DC Cinematic Universe. Although Adams has given memorable performances as a wide variety of characters, from a Disney princess to a ’70s charlatan, she was not suited to playing hard-hitting reporter Lois Lane.

Amy Adams has a breathy voice and soft features, which didn’t lend themselves to the steely quality that’s associated with Lois Lane, Superman’s girlfriend. Lois is smart and tough, but Adams’ portrayal in both Man of Steel and Batman v Superman: Dawn of Justice made her seem like a pushover.

Beyond blurring the sharp edges of a character, Adams’ line deliveries were stilted. Perhaps Snyder directed her to run her words together, but too often, the rhythm and pacing of Adams’ dialog was off. Maybe she tried to speak in the rapid-fire way of a 1930’s dame. However, the overall result is that a different actress would have been better as Lois Lane.

Thanks for reading! Download these free guides with timelines, cast info and whether or not to stay through the credits.

Questions About Your Netflix Account? We Have the Answers