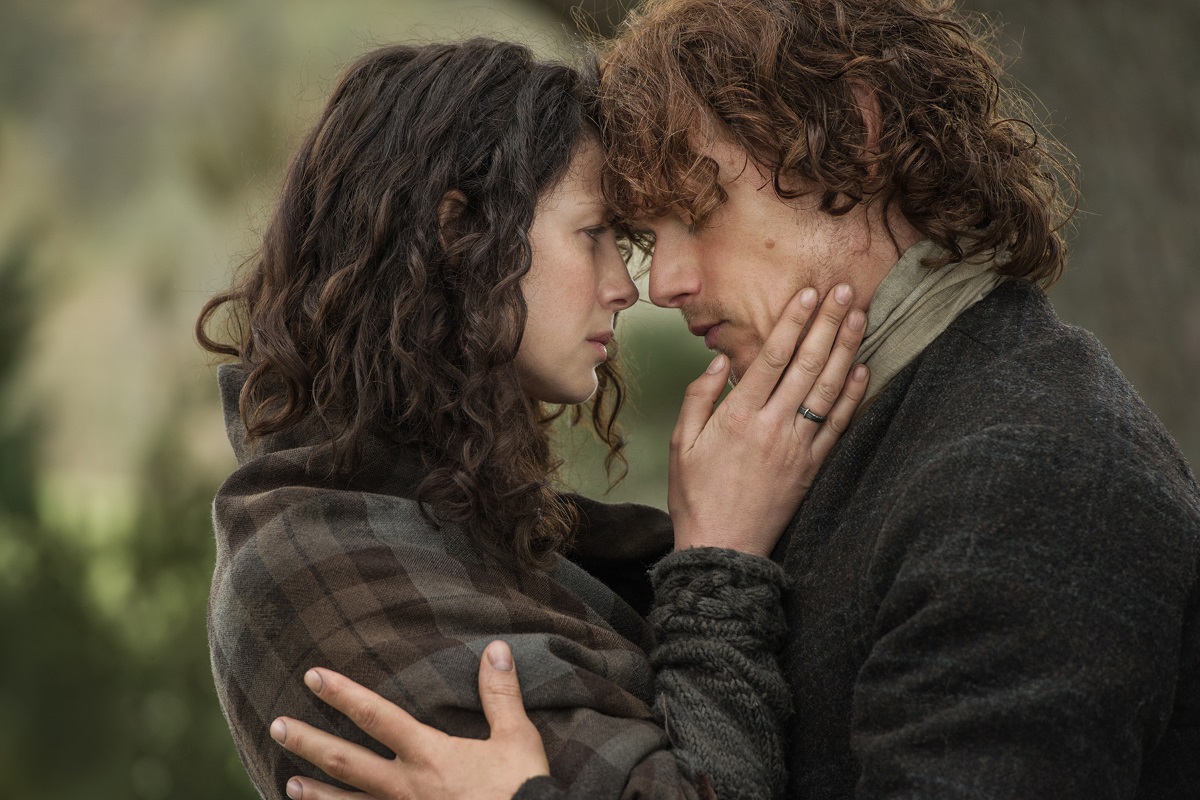 Outlander gifs are a lot of fun. It’s a way to re-run the most epic moments from special episodes ([cough] THE WEDDING [cough]). You can post these awesome Outlander gifs on your blog or share them on social media.

The second half of Outlander Season 1 returned with a doozy of an episode, “The Reckoning,” which was a turning point in Claire and Jamie’s relationship. She realizes what she means to him, and what she has cost him. He realizes he can’t be a traditional husband, and that he and Claire must be equals.

Nearly every episode in the second half of the first season will have big moments, especially in the run-up to the first season finale. (If you’ve read the books, you know it’s time to fasten your seatbelt because it’s going to be a bumpy ride!)

The official Outlander website used to have dozens and dozens of gifs from the show. Now you can find most of them on Giphy. What are gifs? They are image files ending in .gif that can be animated while still keeping the file size relatively small. Huffington Post and Moviepilot use them almost exclusively. If you visit the page, I’m warning you that migraines or seizures may occur because they’ve got every animated gif they’ve ever made on the same page. Plus, it’s best to have a lightning fast Internet connection to view it.

In the meantime, here are ten of my favorite Outlander gifs, mostly taken from just the second half of the first season, with one from “The Wedding” included. (How could I leave THAT out?)

10. “I swore an oath before the altar of God to protect this woman!” In “The Devil’s Mark,” Jamie shoves his way through the mob to stop them whipping Claire. He rescued her from being burned at the cross. When his red hair appears at the back of the room, everyone’s heart burst because we were thinking, “She’s saved!”

9. The gun misfired! Jamie bluffed his way into Captain Jack Randall’s room with a faulty pistol in “The Reckoning.” (He’s got some big ones under that kilt!) I think we all went, “Whew!” when the pistol misfired so Jamie could grab Claire and run.

8. “Seems I cannot possess your soul without losing my own.” After the rescue at Ft. William in “The Reckoning,” Claire was punished (spanked) for putting all the men’s lives in danger. She was a bit frosty toward Jamie after that. She finally warmed to him when he pledged his life to her. This is after their “reconciliation.”

7. “Come back to me, James Fraser.” In “The Devil’s Mark,” Jamie is ordered to accompany Dougal back to his home. This is one of the first times we see that Claire has truly fallen for Jamie, regardless of her marriage to Frank and her time travel predicament.

6. SMACK! I think by the time we got to this point in “By the Pricking of My Thumbs,” we all wanted to slap Laoghaire. We see a lot more of her machinations in the TV show than we did in the book. (I hate her just as much, though.)

5. “1968” In “The Devil’s Mark,” when Geillis turns to Claire and says, “1968,” we get an inkling of why she had been pressing Claire for her reasons for being at Castle Leoch. When Claire sees Geillis’s smallpox vaccination scar, then we know for sure: She’s from the future, too!

4. Craigh na Dun How amazing is it that Jamie believes Claire’s story in “The Devil’s Mark?” It’s a testament to his trust and faith in her. Here, they’re saying good-bye. I thought these scenes were much better in the book, but Diana Gabaldon could linger much more, and give us more of an idea of what was going on inside Claire, than the TV show could. I would have loved to hear Jamie tell Claire how hard it was to leave her on top of the hill, like he did in the book.

3. “I’m from the future.” Claire finally tells Jamie why she’s been so secretive, and why she doesn’t understand so much. We know things will never be the same again after this conversation.

1. “Take off your shirt.” Claire tells Jamie to take off his shirt so that she can see what he looks like in “The Wedding.” What you may not know is that this is fairly brazen for the time. It was common for people to leave their nightshirts on for various reasons: warmth, modesty, morals. Diana Gabaldon has a scene in one of the books when a man asks Claire if she has ever seen her husband’s back. She realizes that in his marriage, he and his wife might never have seen each other naked. Of course, Claire didn’t say, “Yeah, on our wedding night I made him strip down.” This scene is one instance when we (and Jamie) realize that theirs will not be a traditional marriage.